I think that the concept of teaching to the test is mostly, though not entirely, a function of the accountability process put into place in our K-12 system. Most people who teach to the test in this environment are doing so with the expectation of teaching their students the fundamental knowledge which is necessary for them to pass on to their next stage of learning.

Sometimes this is essential and useful. What if there were no understanding of end outcomes for a course/class/year/school? Then each one would be different and a student from one would not have learned or even studied the same things that a student from another did. We would not have anything like a basic level that could be assumed within education.

And this can be useful for a teacher as well. I went to high school in New York, where every student in a course must take the statewide final exam in their course. It did several things for the teachers.

First, it removed the onus of “it was too hard for X” because it is a statewide requirement that you know how to prove that a line has 180 degrees (or whatever).

Second, the final was useful because it gave the teachers a clear set of objectives to be aiming for. World history wasn’t just supposed to talk about the history of a single country outside of the US, but was supposed to cover art and architecture and politics throughout world cultures. European history wasn’t just modern or early, but covered everything from the Etruscans forward.

Third, it allowed teachers a bit of flexibility in grading. This was not mandated (like it presently is in Dallas or Pittsburgh), but a student not doing well in a course, but TRYING, could be given a low passing grade with the clear understanding that the student would not pass the course if they could not pass the final. That was a statewide requirement. So a teacher could reward effort of a student without doing social promotion or effort promotion for the entire course.

College teachers usually create their own tests. They know what is on them and they should certainly make the information available to the students through discussions, readings, lectures, activities, and assignments. 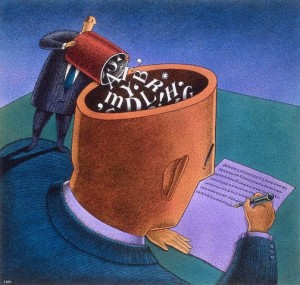 In addition I have upon rare occasions had a teacher who taught only what was on the test and nothing else. Each class period consisted of covering ten or fifteen minutes’ worth of material which was boiled down to a single question on the exam. And that was all the class consisted of. I am opposed to this approach.

In my British lit course:

In my British Literature course, I primarily use out of class papers, where the students have to integrate what they learned in class and what they have found or discovered on their own. I do have two exams, though, which cover factual materials in a paragraph form. In those exams the students must write about the work addressing a certain question.

Because the course is involved and we do lots of reading, I allow the students to use their notes. They cannot use the book, but they can use anything that they created. This does two things. It encourages reading as we go along (because there is no way they can do all the reading before the exams) and it encourages them to take extensive notes on my lectures, our discussions, and the texts themselves.

Some teachers might feel that they ought to remember the issues on their own, but I feel that the way I have created the test allows me much more flexibility and gives the students a greater likelihood of doing well.

In addition, for the final, I ask the students to create questions based on the information we have covered in the course. I usually use at least two of those and if they come up with a question I was already planning on, I let them know that as well. …In a class with twenty questions, I will say, “Four of these will be on the test. Two of them were already on the test and two of them have been chosen from your suggestions.” I do not, though, tell them which those are.

One thing that one of my other colleges had and that I wish we had here was a final exam that was department-wide for freshman composition.

For the exam, there would be five or six writing prompts chosen by teachers and could not be prompts used in classes that semester. Every freshman composition student would take the exam. Then each teacher would grade two exams for every student they had in their classes, but they would not grade their own students’ exams.

These grades would be on a scale from 1 to 5. When the exam was first created and used, teachers were required to get two grades next to each other. So if one teacher gave it a 1 and another gave it a 5, someone else had to grade it and either give it a 2 or a 4 for it to pass. Obviously those with two 3s or whatever were looked upon most favorably. Because of the growth of the English department and the class sizes, however, that school now only requires that they be within two points. So a 1 and a 3 would be a match or a 2 and a 4. Then they would get the average as their final grade.

What this did was allow the students an outside, nonpartisan grader examining their work. It eliminated any discussion of bias on the part of the teacher (at least for the final) and it allowed the department to know about any outliers. If, for example, my student got a 3 (a 70%) on the final, but they had a 98 in my class, there might be an issue. Or, on the other hand, if I consistently gave all my students better or worse grades than they earned on the final, this was also clear when I turned in my grades. (We had to give the final exam grade and the final average.)

This also let us know of any grading outliers in the department. If someone consistently gave significantly better or worse grades, their averages could be looked at and they could have extra norming help.

It created an interesting experience once when the first two graders gave a paper a 1 and a 5. The 1 was given because the audience (the teacher) was told that English teachers were idiots and the whole paper focused on how much smarter the student was than English teachers. The 5 was given because there was not a single grammar error in the whole eight pages of the paper (written in two hours). When other readers also failed to come to agreement, the entire department got back together to grade and discuss the paper.

Joe was almost as wordy as I was:

It is interesting to see how other English departments work. The only one that I had close relationships with is mine at Dartmouth College (where I was an English major and art major).

Unlike many other schools in the Ivy League, the English department had each major write a thesis before they could graduate. My thesis class was in the work of Josef Conrad. I wrote a paper every two weeks or sooner on what I read and ideas that came from the novels. In one course, we had to read of Conrad’s major works. Some papers I got a low B, some an A, and a few a C (where the instructor felt that I missed the essence of what I was reading but did a journeyman’s job in writing).

In the time before a final grade was given, I took one paper where I jumped off a cliff of risk (not caring if I landed or not), got an A because the professor could see that something was happening which was unique, and expanded upon that short paper for the thesis. I had to go in an defend my writing (which took Lord Jim and Monet and discussed the underpainting in each and how (in Conrad) it came subtlely through the surface of the writing of the novel, just as underpainting by Monet gave added meaning to his paintings. It was defended like my two master’s degrees had to be defended, they meet, discussed my ideas, and then I set up a meeting with my primary professor. I got a A for the thesis, an A for the course (although my comulative grade average was proprobly B+), and graduated with English Honors. I am telling this not to blow my own horn but to say that “failure” in some papers (some endeavors) can be “learning experiences” that leads to higher accomplishments.

Randy Pausch, the famous computer professor at Carnegie Mellon, who died recently after his “Last Lecture” was made viewed by millions worldwide, gave some students in his class the “First Penquin Award” (it commemorates the first penquin who jumps from an iceberg into predator-infested waters) to the student who tried something really difficult and failed to bring it off.

[Here is his Last Lecture.]

My friend Robert Wilson works on his 19 hour play, “civilWars,” for 5 years in six different countries, doing only acts in each, expecting to put it all together at the 1986 Olympics in Los Angeles. Los Angeles never came up with the money to bring all the theater companies together for the play so it never happened. No one has ever seen Bob’s efforts, but it made his professional life. Some may call this a failure. I see it as “experience” gained for the future (which he has used and made his name a part of the contemporary avant-garde scene).

At Dartmouth they did a survey of successful graduates, and the ones who were most admired for their accomplishments were the B and B+ students, not the book worm who got the A’s. There is more to success than what most tests ask a student to show. I would like to see a time when student give themselves a grade after five years out in the world. How much of the information was useful? How much was obsolete the day after they got their diplomas? What thinking did they receive that helped them unlock the systems of the world?

The mind today is not a toolbox of data; it must be, in my thinking, a sorting computer that unlocks systems and opens doors to data. A leader does not have to have or retain all the data but must hire those who do and be able to see the world from a satelite point of view. Those who are successful are able to jump the “brickwalls” placed in their path. They are able to find the keys that unlock the systems of the world and make them work for them and others. A teacher is one of the first mentors in this process (parent, school instructor, senior advisor in any business, role model, friend, partner, etc.).

Still, I enjoyed reading your ideas of testing, even when I see other ways to get there. We both agree that only teaching for the test leaves a student inadequately prepared for life.

Due to the foibles of the internet, I answered back in a concise manner:

In this day of legal issues, I would not feel comfortable grading someone for their effort. I think I would have a hard time defending such a grade for one person and not for another. (How do I know how much effort the person put in?)

I like the idea of the First Penguin Award, though, where the teacher identifies the effort/stretch and gives additional points for that.

This is from my adjunct certification course.