[W]e need to think because the world we live in, however well we learn to cope with it, is constantly forcing us to choose. When experience surprises or disturbs us, we have to â€œmake up our minds,â€ and, as the phrase suggests, when we do that, not only are we deciding what to do with the world about us; we are deciding what we are or want to be. â€“Monroe C. Beardsley, Practical Logic (Englewood Cliffs, N.J.: Prentice-Hall, Inc., 1950), x-xi.

[There are] two distinctly different kinds of thinking, creative thinking and critical thinking. Creative thinking may be defined as the formulation of possible solutions to a problem or explanations of a phenomenon, and critical thinking as the testing and evaluation of these solutions or explanations. â€“W. Edgar Moore, Creative and Critical Thinking (Boston: Houghton Mifflin Company, 1967) 2, 3. 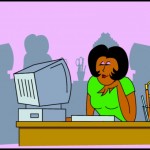 Critical thinking is the intellectually disciplined process of actively and skillfully conceptualizing, applying, analyzing, synthesizing, and/or evaluating information gathered from, or generated by, observation, experience, reflection, reasoning, or communication, as a guide to belief and action. â€“Michael Scriven and Richard Paul, â€œDefining Critical Thinking: A Statement for the National Council for Excellence in Critical Thinking Instruction.â€ http://www.criticalthinking.org/aboutCT/definingCT.shtml (16 May 2005).

I guess I personally describe critical thinking as the ability to listen to something or read it and analyze it for pathos (emotion) and logos (logic) appeals.

With both my students and my sons I model this. I remember very clearly pointing out a billboard to my sons and explaining that the billboard was trying to convince them that
1. alcohol was okay in the middle of the day
2. spaghetti needed a cold beer with it
3. a good time guaranteed with spaghetti and beer

Then I asked them what in the billboard made me think that.

I do the same thing by looking at a reading, telling the students a couple of different ways to look at something, and then asking them to tell me how someone reading the work could arrive at one conclusion over the other.

I talk about presumptions when I am doing this and I explain that a question can have two very opposite answers, assuming different ways of looking at something. I give as an example the “dueling exam professors.”

I wrote my thesis on Hemingway’s novels. I didn’t read many of his short stories. (Mistake that.) Several profs came to my defense. Two of them taught Hemingway and had opposing approaches to his works.

So the first one gave me a scenario, “Assuming X and Y (which were both true), what is the answer to Q?” I answered the question.

Then the second gave me a competing scenario, “Assuming A and B (which were also true), what is the answer to Q?” Again, I answered the question.

My answers were totally opposite. I don’t think both of them could be true in reality. But given the parameters of the question with those things as most important, the answers came out differently.

I tell my students that if I knew which of the presuppositions were in fact incorrect or which were minor instead of essential, I would have only had to give a single answer. But I didn’t.

It’s an example of critical thinking in action. Not a fun example when you are the person being used as the saber in the duel, but a reasonable one.

This was from the adjunct certification course as well.