This has come up twice in the last twenty-four hours so I felt like I had to address it.

A smart student at the local high school and a friend of my son’s asked for quotes for her quiz, since she had not read the book. What’s up with that? There are even excellent videos of the book in question which would give her sufficient quotes to actually know the context of them.

(I get around this problem by giving the students the quotes and asking them who said it and to whom.)

Then Matthew Yglesias, a Harvard grad, wrote about lying about books he’s read.

Folks, that is not something you should admit in public. Lying. Why would anyone who reads your blog and doesn’t know you personally ever trust you again? Shoot, some of the folks that know you won’t trust you.

I am a PhD in English and I have not read every book out there in English-language literature. I don’t like some of the ones I’ve read.

But I don’t lie about my reading.

I read The Scarlet Letter once and didn’t like it.

I’ve read Frankenstein a lot and love it, but hate the feminist criticism about it, though sometimes I think they have a point.

I had to read Animal Farm for school and enjoyed it. My son had to read it for me and loved it.

I’ve read several Hardy and several Faulkner books, none of which I liked. I hope never to have to read another. I do fancy one of Hardy’s poems, though I don’t like the subject matter. But it’s easy to understand and very interesting. I teach it to my freshmen lit students.

I haven’t read the book my high school friend didn’t read for her quiz. But if I ever have to teach it, I will read it before presenting it to the class. 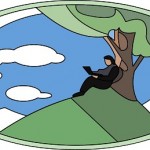 I do not read to show off my brain. I read to feed my brain and my soul. And so I try to avoid literature most of the time because it is thoroughly depressing.