Many students think so. And Bruce Fleming says it is because we have professionalized the teaching of literature.

Nowadays we teach literature as if we were giving a tour of a grocery store to Martians who’ve just touched down on Earth. We professional storekeepers explain the vegetable section, the dairy section, the meat section, note similarities and differences among our wares, variations of texture and color, the fact that there’s no milk where the applesauce is, and perhaps the fact (which we bemoan) that there are no papayas. We’re teaching the store, not what’s in it. We don’t presuppose visitors know anything about where the things on display came from; if they do, it’s because we told them â€” that can be our work too, speaking of the world before it ended up in the grocery store. But we’re the ones who decide whether or not to include that world outside, and how much. We just want to rack up sales. All this fixation by the storekeepers on the store misses the point: People grow food in order to eat it. Similarly, books are meant to be read. Reading is the point of a book, not integrating it into a discipline.

Interesting. That simile doesn’t do it for you? How about this one? 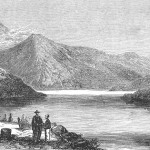 Literary study in the classroom nowadays offers views of the work of literature rather like the views of Mt. Fuji in Hokusai’s celebrated spring series on “100 Views of Mt. Fuji.” In each view, the mountain, while present, is frequently tiny and in a corner, viewed (in the most famous print) beyond the crest of a wave whose foam seems to make fingers at the edges, or (in another) through a hoop that a barrel-maker is shaping.

Those are not the front-and-center shots on a postcard. They foreground the angle of the mountain, its treatment, much the way a literature professor does with a funky viewpoint that got him or her tenure. Of course the postcard shot has its own point, but in a real sense it’s more neutral than the angled treatment. It doesn’t push our noses in its approach: It defers to the object it is depicting. We’re far more conscious of the treatment of Mt. Fuji in an artsy Hokusai print than we are in a postcard shot. And that means, we’re all but compelled to see the mountain the way it’s presented, rather than being able to work on our own presentation.

The point of those two paragraphs, though, is the next sentence. “That’s why literary studies is intrinsically coercive.”

Here’s his discussion of that:

The power of the professor in the professionalized classroom â€” and the pressure on students to conform â€” is thus exponentially greater than it was before people started thinking that the point was the “View of Mt. Fuji” rather than Mt. Fuji viewed. If you want a good grade, you adopt that viewpoint. That’s what’s being taught, after all. Several generations of students have by now learned to give in to the power of the literary-studies professor â€” and hated every minute of it.

This is why I didn’t enjoy some of my graduate classes. You had to take the view of the teacher in order to write the paper and pass. That’s wrong. I like better the idea that the professor presents his view, through the red flag, perhaps, and I present mine, striated in a rainbow.

There is a point to college or university guidance of literature. Most people never read serious literature at all without a guide. Too, people get more sophisticated as they have things pointed out to them, or as they read more. And many people just don’t know what they may read to begin with. So there’s a reason for teaching. We professors just have to remember that the books are the point, not us. We need, in short, to get beyond literary studies. We’re not scientists, we’re coaches. We’re not transmitting information, at least not in the sense of teaching a discipline. But we do get to see our students react, question, develop, and grow. If you like life, that’s satisfaction enough.

This ending paragraph offers hope to me. Yes, we want a guide to the reading. But what could the students be getting out of the reading? That is up to the students. He does guide them, in thinking of literature as it relates to their lives.

And that is what I am trying to do with Brit Lit I in May. We’ll see how well I carry it out.

But consider, Everyman is about a man told he is going to die. Where does he seek comfort? Where does he find comfort? Those are issues my students-to-be can relate to. How could we use that information while we are still living and not dying? That’s another question.