Mark Bauerlein of Minding the Campus says, “[T]here is little evidence that full-time faculty are better teachers than part-timers are.”

New Directions for Higher Education published a dedicated volume documenting concerns that poor institutional assimilation by part-time faculty adversely affects student learning. The effects included reduced instructional quality, lack of curricular cohesion, and weak advising (Benjamin, 2003a, 2003b; Cross & Goldenberg, 2003; Elman, 2003; Schuster, 2003; Thompson, 2003; Townsend, 2003). While successfully raising questions about the instructional effectiveness of part-time faculty, the quantitative evidence in that volume did not address the central question of whether heavy reliance on part-time faculty significantly alters student outcomes. This issue was directly assessed in two quantitative studies examining student persistence and graduation. Harrington and Schibik (2001) studied one large midwestern university and found that, when freshmen took a higher percentage of their courses with part-time faculty, they were less likely to persist towards their degree. Ehrenberg and Zhang (2004) tested a large sample of institutions for which there were multiple observations dating back to 1986. They concluded that for each 10% increase in the percentage of faculty employed part-time at four-year institutions, graduation rates decrease by 2.65%. [bolding mine, ed.]

That is a major point, I think. If taking more part-time teacher decreases your likelihood of graduation, wouldn’t a student want to take full-timers? 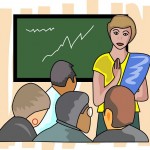 I will say, though, that when I have on-campus hours as a part-timer, I still don’t see many students. And the ones I do see are from two categories, the hardest-working and the troublesome. The hardest-working students are coming to see me with early versions of their papers and asking how they can be improved. They are doing their best to do their best and I love to help them. The troublesome ones are those who probably won’t make it through class or their degree, or will only get it because they are such pains when thwarted that no one is willing to turn them down. These are the ones that it actually hurts to help. I worked with one of these for sixteen hours (minimum) to thirty-two hours (maximum) personally outside of class. When she made a B in the class, she ripped me up on Rate My Professor. She’s the kind of student that makes me not want to have office hours, even when I can.

Student evaluations of full- and part-time faculty differ little (Hellman, 1998). Yet differences have been found in grading patterns, with part-time faculty grades being significantly higher (McArthur, 1999).

I know that this latter has been an issue for me as a part-timer. I wonder if I am grading too hard, if grading easier would improve student retention. (I already have glowing evaluations.)

So, as an adjunct, am I helping or hurting my students?

I have a PhD, which is an issue discussed by Benjamin. I have office hours (sometimes). I am available. (I give students my home phone number.) I use multiple techniques for teaching.

I guess I think that, if there is a problem with adjuncts, it isn’t me. Of course, all of us probably think that.

2 thoughts on “Is there a problem with adjuncts?”