For the first time in three days, I have had a minute or two to look at blogs. I have found a lot of posts worth perusing.

Majoring in business?
Cal Newport at Study Hacks says “don’t major in business.” Instead, he suggests students who want to work in business should major in the classics and take four years of math in college.

I don’t know if that would get you a job, but it would make you seem smarter than the average college student.

Personal note: My eldest is getting a math degree in college and I want him to take humanities courses as a way to round out his education.

Lost: Common Sense
Betsy’s Page has the story of the student who was suspended for carrying the wooden rifles for her drill team to school.

I think that part of the reason this happened is that we have adopted zero tolerance because we don’t want to have to make the hard decisions, not because we don’t think people are able to do so. 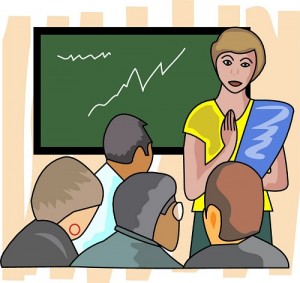 Classroom Management
D-Ed Reckoning has a video on classroom management by Saul Axelrod.

Diversity in colleges
Discriminations has a post on the benefits, if any, of diversity.

We found that neither the multicultural policies of the university nor the general multiethnic environment had profound effects on the intergroup attitudes of the students. Thus, in broad terms, the students left the university with largely the same social and political views that they entered college with.

This happened to me for one year in math in the eighth grade and really messed up my college-preparation experience. I spent the whole year in math doing art projects, because I could do the math in the class in two minutes. But the seventh grade teacher wouldn’t let me take the math test to go into Algebra I because she didn’t like me.

Dealing with controversial issues
At TYCA I talked about introducing controversial issues and how to do so well. Most of the teachers there thought I was teaching a “duh” topic. Apparently, not everyone has realized that controversial issues mean that equally intelligent people have differing opinions. The LA Times carries the tale of a speech teacher calling a student a “fascist bastard” and dismissing the class so they didn’t have to listen to his informational speech.

Volokh, a lawyer, discusses the situation.

In particular, the evaluation sheet on p. 31 reflects that the teacher indeed didn’t give a grade, but instead said “Ask God what your grade is.” It seems to me pretty clear that refusal to give a grade because the teacher disapproves of the religiosity of the student’s presentation, or of the student’s opposition to same-sex marriage, is indeed a First Amendment violation.
…
Finally, note that one of the College’s responses (pp. 37-38) states that the College is indeed acknowledging that the teacher’s behavior was improper, that the teacher would be disciplined in some unspecified way, and that Lopez wouldn’t ultimately be penalized on his final grade. At the same time, though, the College’s response notes that several students were offended by Lopez’s statements, and says:

“Regardless of the other students’ reactions to Mr. Lopez’ speech, Mr. Matteson will still be disciplined. First amendment rights will not be violated as is evidenced by the fact that even though many of the students were offended by Mr. Lopez’ speech, no action will be taken against any of them for expressing their opinions.”

Erin O’Connor has an interesting response to it. I have to admit that I thought about the point she makes last week (for about a minute), but it did not reoccur to me when there was such a blatant example as the Lopez case.

What if they don’t learn?
What happens when our students don’t learn anything? They teach what they didn’t learn. Here’s a discussion of MBAs doing that.