This is a video, fairly short, which illustrates how low SES students function in college. That’s not what is supposed to be about, but it is incredibly relevant.

Exactly how should we teach ‘digital natives’?

A Sociologist says Students Aren’t so Web-wise After All

I think the assumption is that if it [computer usage] was available from a young age for them, then they can use it better. Also, the people who tend to comment about technology use tend to be either academics or journalists or techies, and these three groups tend to understand some of these new developments better than the average person. Ask your average 18-year-old: Does he know what RSS means? And he wonâ€™t.
…
There are positive outcomes for those who know how to work and employ tech information, and those who lack information will confront a different situation. In terms of a link with demographic differences, those people who seem to be more savvy are the ones who tend to be in more-privileged positions. There will be an increase in social inequality if this divergence continues this way.

But what stands between disadvantaged kids and college is not mere money. It is orderliness, attentive mentoring and simple organizational guidance. Public schools used to be the great equalizer in America — the institutions that allowed the children of immigrants and the descendants of slaves to become fluent in the English language and prepare them for careers. In too many urban areas, they don’t perform such basic educational functions. But they don’t offer structured environments, either, for the few students who are trying to lift themselves up and get a better educational experience at college.

School turnaround built on teaching students how to behave. This article is about an elementary school, but the same issues work in college. If the student does not know how a college student should behave, they will not behave that way. Low SES students are especially disadvantaged in this way. Ruby Payne’s work is particularly applicable to this issue and I will be writing on it tomorrow.

Something that might be relevant is Internet culture spells doom for strait-laced orthographers.

A related joke to the article above goes like this:
Why is there such bad spelling on the internet?
Because it is powered by 100,000 English teachers rolling over in their graves. 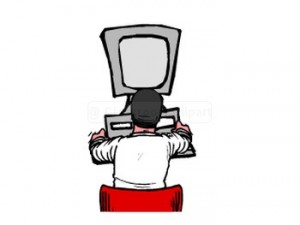 A Closer Look at Why People Blog

Weblogs in the Writing Classroom, published 2008

If you are wondering what other people are doing, a good source to look at is CCCC’s Survey of Multimodal Pedagogies in Writing Programs. I especially was interested in question thirty. “What role should the production of non-textual compositions play in the writing class?” It at least tells what people are thinking about the issue.

Dynamic Subspace is not too impressed with the idea of a multimodal classroom.

I love technology, and itâ€™s an integral part of my life, including two World of Warcraft accounts, a 30â€³ Apple Cinema Display and Mac Book Pro, iPhone, building a Media Center PC, blogging, and keeping my girlfriendâ€™s ailing Sony Vaio alive while she studies for her comps, but I strongly insist on keeping that separate from my goal of enriching the lives of my students by challenging them to think deeply, imagine new possibilities, and effectively communicate through writing before moving up to multimodal composition practices.

Computers and Composition Online: Theory Into Practice has some good articles on teaching multimodal classrooms.