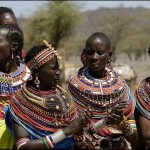 Our students may have a different culture than we do, but it may not be as visible as the differences as the picture of these women of the Samburu tribe show. It may not be visible at all. But it could still be there.

Most college professors came from the middle class or the upper class. There are very few college professors who came from generational poverty. But many students, especially in the community colleges but even in large universities, come from generational poverty and are attempting to escape from it. They recognize that education is essential, even when they don’t know how education “works.”

As teachers, we can also be the facilitators for their entry into the academic community, by making clear what the mores and customs are. Why do we need to do that? Because they aren’t from our America. They didn’t grow up learning these things.

Some notes from Ruby Payne:

“Hidden rules are unspoken cues and habits of a group. Distinct cueing systems exist between and among groups and economic classes. Generally in America this notion is clearly recognized for racial and ethnic groups but not for economic class” (58).

“When there are limited material things, and life is about survival, then virtually the only possession one has is people. And when people become possessions, the rules change. That’s why the physical fights over people are so intense- the person is a possession. That’s why being educated is often feared in generational poverty because when people get educated they usually leave [emphasis mine-ed.]. That’s why the put-downs for getting training or getting educated are so intense from those who come out of generational poverty” (60).

She means here that it the put-downs are intense toward the people who are getting educated or getting the training from the people who are not doing those things, if the two sets of people are in generational poverty. I would argue that it is the main reason students from low SES groups drop out of college. First generation immigrants from Asian countries do not, for example, because their culture is different, not because their families are richer.

“Six aspects of language affect the ability of a person to ‘listen’ in the workplace: verbal/non-verbal, concrete to abstract, language registers, discourse patterns, story structure, and ability to formulate questions” (90).

If our students have different verbal and non-verbal cues and ways of listening, if they do not understand our examples because of the ways we tell stories, and they can’t formulate questions as we do, they are in trouble. We can help them. We just have to know what their issues are.

“In poverty, the most important information tends to be conveyed non-verbally” (91).

“.. the structure of a story is different, depending on the use of casual or formal register. In formal register, a story is told from the beginning ot the end with cause, effect, and sequence by time. The story revolves around a plot- what happened. In casual register (this is what is used in gossip), one starts at the end first. Then episodes or vignettes are shared, along with spontaneous comments from the listeners” (95).

Our students may write a narrative in the casual register, especially if they are from generational poverty, because that is how stories are told in their experience. If we want them to tell them a different way, we need to be explicit about the rules.

Some notes not from Payne:
It is not common for class-disadvantaged students to take advantage of the learning tool that the internet can be (Rothbaum, Martland, and Jannsen).Â Â  Â Â

Rothbaum, Fred, Nancy Martland, and Joanne Beswick Jannsen. â€œParentsâ€™ Reliance on the Web to Find Information about Children and Families: Socio-economic Differences in Use, Skills and Satisfaction.â€ Journal of Applied Developmental Psychology 29.2 (March 2008): 118-28.

The key to effective cross-cultural communication is knowledge. First, it is essential that people understand the potential problems of cross-cultural communication, and make a conscious effort to overcome these problems. Second, it is important to assume that oneâ€™s efforts will not always be successful, and adjust oneâ€™s behavior appropriately.

For example, one should always assume that there is a significant possibility that cultural differences are causing communication problems, and be willing to be patient and forgiving, rather than hostile and aggressive, if problems develop. One should respond slowly and carefully in cross-cultural exchanges, not jumping to the conclusion that you know what is being thought and said

from the University of Colorado