It has been a lot of fun.

I went to a Myth and Fairy Tale presentation.

The Death of Chupacabras: How the Internet Demystified and Poisoned a Cultural Phenomenon
Charles Hoge, Metropolitan State College, Denver

I enjoyed all three of these.

St. Patrick
The one on Saint Patrick was a survey done last year during the week of St. Patrick’s day. I have to admit that I wear green and don’t go to church. (This was part of what he was asking.) I am of Irish descent. My great-great-great grandparents came from Ireland to Pennsylvania where their son married a German girl.

I thought it was a fun study and an interesting beginning for a discussion/investigation into the creation of Irish-American culture. 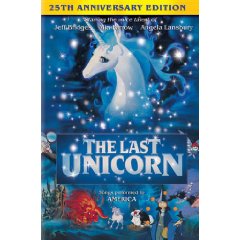 Unicorns
The unicorn paper included some beautiful unicorn pictures. I would have enjoyed that just for itself, even if there had been no content to the paper. Thankfully, there was a lot of content. He posited that the change in unicorn sex from male to female came about as a result of the 1967 book The Last Unicorn.

I think he said that unicorns hard pretty much disappeared from literature and art following some church council. (I can’t remember which one. Owen, if you read this, which one was it?) But I remember Jewel the Unicorn, a male unicorn, from C.S. Lewis’ The Last Battle. And I wonder how many others there might have been. I figure that now that he has alerted me to the thought, I’ll be seeing unicorns everywhere.

Chupacabras
I was fascinated to learn that Chupacabras hit the planet in 1995 in Puerto Rico, that “they” were only seen singly (so there may only have been one), but that by late 1996 people were blaming many kinds of destruction on chupacabras in the US as a joke.

First, I didn’t know they had been real -or at least thought to be real. 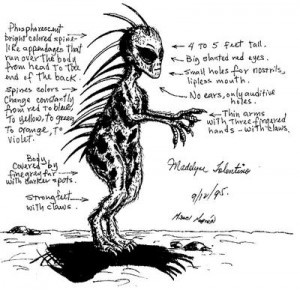 He showed this picture, which I found on wikimedia.

He said that some suggestions for it were that it was a robot, a concerted attempt to destabilize the government or economy (?), or maybe an alien pet left behind by a family in a UFO.

I am fascinated about this, and not just because Texas Anti-Alien Militia has something like these things show up and they are alien animals.

Then I went to another Myth and Fairy Tale presentation.

This was a very fun panel and fit in very much with what I do in using fairy tales to introduce literary analysis. I enjoyed the panelists’ presentations.

Winnie presented on Cinderella and various presentations of the fairy tale. I liked that she did not simply say that there were other presentations, but actually talked about them and said what they did well and what they did poorly. She mentioned five particular works, three of which I had read. Despite the fact that I had read them, she helped me to think about them in a different way.

Winnie did a good job with her audiovisual presentation. I liked that she had her main points up for us to follow. She also shared a Tata Young video at the end in which the words contradict very explicitly the visuals of the music video. (Cinderella)

But the language is very different from the actions. A true disconnect here.

The discussion afterwards was especially fun because I had something that I thought was worthwhile to contribute.

This conference is going to be a lot of fun.