Multiple Sources for the Judith Poem

Although it is common to examine only the apocryphal book of Judith as a source for the Old English Judith poem, this view is too limiting.Â  Aside from the apocryphal Judith, Christian traditions, Old English heroic traditions, and the valkyries of Old Norse mythos could easily have contributed to the construction of the poem.Â  There are clear differences between the apocryphal Judith and the Old English Judith.Â  One possible source for the differences is Christian tradition, which gives a higher status to a virgin than to a widow.Â  A second tradition that could have contributed to the recreation of the poem is Anglo-Saxon heroic poetry.Â  In many ways, Judith is similar to the heroic male warriors and her story is similar to the heroic stories of the same time period.Â  The third tradition which may have effected the creation of the poem is the valkyries of Old Norse mythology.Â  The poetic Judith can be clearly seen as the product of a heroic religiously syncretistic age.Â  The Judith who emerges in the Old English poem is a uniquely Anglo-Saxon hero whose sex does not limit her heroic qualities but enhances them.

I will be giving this at the Useful Past presentation in Tyler, Texas. 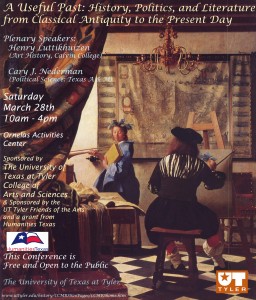