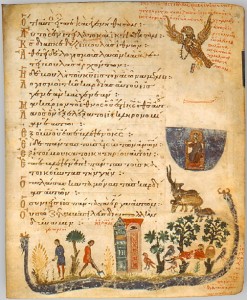 Although it is common to examine the apocryphal book of Judith as the only source for the Old English Judith poem, this view is too limiting. There are clear differences between the apocryphal Judith and the poetic Judith.

The apocraphyal Judith was a widow, not a virgin, so the poet made a conscious decision to change Judithâ€™s marital status. The possible sources for the change in status are various.

The change in status for Judith could have come about because in the Anglo-Saxon age it was possible for a single woman to maintain a position in society. This understanding of the meaning of Judithâ€™s singleness is upheld by the extensive laws of the day which existed to protect the rights of women and by the presence of the wills of powerful women who maintained their own property (Fell, 83).

While the change in Judithâ€™s marital status has multiple possible sources (Christian, Anglo-Saxon heroic, Old Norse valkyrie), one source for the poetic Judith is clearly from the Old English heroic tradition. The poetic Judith must also be compared to the Anglo-Saxon heroic male warriors. The same heroic attributesâ€”soberness of mind and courage in actionâ€”are emphasized.

The poetic Judith saw herself not as insignificant, but as a weapon fit to destroy a powerful enemy. These details establish the place of women in Anglo-Saxon poetry. A woman in Anglo-Saxon society was allowed to be above the average in wealth, in beauty, and in ability (Fell). A hero is expected to be. It is because of these qualities that the audience expected heroic actions. They were not disappointed.

Another way in which the treatment of the poetic Judith is similar to that of the heroic male warriors is in the descriptions of her personal wealth. Like other heroes, her wealth is described by the adornment of her person. She was arrayed with bracelets and wearing rings when she went to Holofernesâ€™s tent (36). She was ring-letted as she chopped off his head (105) and ornamented with gold when she called the town to her and showed them his head (171).

The source of her wealth is the same source as the male heroes. Her wealth is attributable to her military exploits, to her having received war booty as a soldier. She is adorned in golde gefraetwod. So are the soldiers who she sends out to fight the Assyrians. This appears to be a formulaic expression for gold ornamentation on military costumes (Damico, 29).

Also, Judithâ€™s relationship with her maid and the description of the maid are militaristic. Judith and her maid are described as beahhrodene (132). Normally someone covered in rings is wealthy and generous and has had a lot of interaction with other people (Damico, 32). While this could easily be applied to Judith, it cannot be equally applied to her maid without loss of credibility. If the woman were wealthy, she would not be a maid. There is, however, another explanation. The poet makes the warrior qualities of Judith also applicable to her maid; the maid is resourceful and mannerly, courageous and careful. The use of ringed one is, in this instance, in the middle of a scene where the two women are portrayed as conquering warriors, returning home in triumph. This sets both Judith and her maid up as heroes. Certainly the maid is a minor figure, but she is a heroine nevertheless. She is a warrior and a warriorâ€™s companion.

Together the two women are a triumphant army. The maid is the armor bearer and the supply clerk, because she carries the provisions necessary for Judith and herself to eat and with which to adorn Judith properly. Judith is the general and the cavalryâ€”coming to the rescue just before the time of surrender. Thus not only is Judithâ€™s status as a soldier set forth, but this status is reinforced by her maidâ€™s status as a solider as well. This understanding of the two women is wholly in accord with the Old English poetâ€™s presentation of them.

Judith has the wisdom of the heroic male warriors. In the poem she enters the camp without any preconceived plan. The only thing she is sure of is that her people are in need of deliverance. The poet shows that Judith has the wisdom to act well in trying situations. Even though she evidenced no idea of how to enter or leave the Assyrian camp, we are told that she did so, apparently at will. This is an integral part of the heroic tradition. The hero must be able to arrive at and depart from a place whenever desired because of a quick wit and an ability to make the most of every opportunity.

When she is led unsuspectingly into the tent of Holofernes, Judith is able to take immediate advantage of her enemyâ€™s weakness. She creates the circumstances in which Holofernes becomes drunk and vulnerable to her attack, even though he is surrounded by armed guards. The poetic Judith once again shows a heroic penchant for turning the worst circumstances to her own good. This is necessary for the creation of a realistic hero in the Anglo-Saxon tradition.

The poetic Judith has heroic strength. Clearly the strength of Judith in the poem is greater than the strength of the biblical Judith and this strength is a product of the heroic tradition. Judith used her heroic strength to lug the dead weight of the drunken Holofernes around inside the tent. The necessity of two chops to decapitate Holofernes matches the heroic equivalence factor which demands that adversaries of the heroes be worthy opponents. Had Holofernes been such a puny enemy that his head could be removed with a simple sweep of the sword, Judithâ€™s heroic qualities would have been diminished.

The poetic Judith is clearly a leader of men, another heroic attribute. She goes against the enemy with only her handmaiden for support. When she has vanquished the leader of the enemy, she returns to a besieged city and commands the guards to let her in. They do so. Her leadership is further evidenced by the fact that she commands her people to take up arms and attack the Assyria army and, with no other identified directives, the people do so in an organized manner. This is not a mob being incited. This is an army mobilizing on orders. Finally her status as a leader is indicated by the fact that the possessions of Holofernes are returned to her as the rightful owner. In addition, she receives her prize from the people as a whole and not from a leader or ringer. It appears from the poem that she is the only war-leader of her people. Because of this, she could be seen as the booty acquirer of her people.

Also Judith has the rhetorical skills of a leader. Through her verbal request to God, she is chosen as a deliverer of her people. At her verbal command, her people go out against the Assyrian army, a force much larger than their own, with the confidence that they will win, because they have Judithâ€™s assurance of the fact. Another example of the poetic Judith utilizing heroic rhetoric is the fact that when Judith returned triumphant to the city, she did not enter into a long (or even a truncated version) and eloquent prayer indicating the incongruency of a mere woman bringing about the fall of Holofernes, and through him the fall of the entire Assyrian army, even though this was a major part of the story of the biblical Judith. The poet is following the heroic pattern and such humility was clearly not a standard form in heroic poetry. In fact, boastfulness is much more heroic than humility and had the poet left the denigrating prayer intact, the heroic qualities of Judith would have been quickly and effectively minimized.

The narrative of the biblical Judith ends by telling how long she lived and how her property was divided when she died. She is set up as the ideal women of Proverbs chapter thirty-one. The narrative of the poetic Judith ends with her sending out the fighting men and receiving back as her booty the weapons of Holofernes. Thus she is a warrior virgin. This clearly sets her up as coming from a different tradition. Having looked at examples, it is clear that one tradition the poetic Judith calls on is the Old English hero.

This is part of a paper presented at the A Useful Past conference in Tyler, Texas.