I have applied for eight jobs this year and received a total of one phone interview.

I want to work full-time and be paid for that, but I don’t know if that will happen.

I’ve been enjoying my years as an adjunct and have even enjoyed the last three semesters as a full-time adjunct. I will enjoy next semester too.

But I need to think about what I can do to get myself out of the adjuncting and into a job.

I’ve gotten conferences this year. I’ve had one publication, five submissions, and one chapter that’s being written when I am not writing on the blog and/or grading. 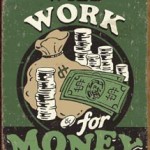 But, as I just read at the Chronicle, one college hired four people and turned down 88 of their own adjuncts… My college won’t even interview me, so I know that I’m not going to get a job there.

I am place-sensitive, and that’s an issue. One thing I need to do in the fall is start checking in August for job openings. And maybe I need to be willing to drive a bit farther.

Or maybe I need to look for a job as tech support or in fulfillment.

Update: I have had interviews for three jobs (06/16). I actually became a finalist for two of the jobs. So, while I do not appear to have made it, I was close.

I applied for a job today at a school where two years ago (when I wasn’t really ready), I had a phone interview. This year I got nothing from them when I applied earlier.

I changed my cover letter significantly. I added my expanded teaching philosophy. And I updated my CV to include upcoming presentations and publications. Hopefully something in all of that will pique their interest.

I’m wondering if someone new quit or if someone who said they were coming got a better offer.

Oh well. I hope they call me.