Some fairy tales are better than others for different types of analyses.

â€œLittle Red Riding Hood,â€ Charles Perraultâ€™s version, or the Grimmâ€™s â€œLittle Red Capâ€ offer quite a bit of information for a character analysis. â€œThe Three Little Pigs,â€ at least in some versions, also has the pigs learning. â€œHansel and Gretelâ€ also has several versions with dynamic characters.

â€œLittle Red Riding Hoodâ€ is also good for theme. â€œThe Three Billy Goats Gruffâ€ is not necessarily good for this because the most obvious theme is â€œmight makes right.â€ â€œThe Three Little Pigsâ€ has garnered some interesting themes besides the obvious of â€œdonâ€™t be lazy,â€ the most interesting being a Marxist reading of the fairy tale.

Most fairy tales are NOT useful for point of view. 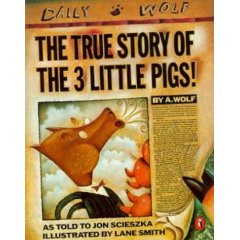 I have an answer for this. I bring in a modern childrenâ€™s story of â€œThe Three Little Pigs.â€ The work is called The True Story of the Three Little Pigs by A. Wolf. I donâ€™t ask the students to write on point of view for this section of the class, but this work gives a very good introduction to the concept.

An analysis of style could be done using two versions of the same story. Use Grimm and Perrault or Grimm and Disney.

This was part of a presentation made to the Conference of College Teachers of English: Texas in March.