President
10:35 (The Pres was busy.)-11:28 Meet with the president.
He spent a lot of time telling me about the college, assuming some things I might think are negative, and sharing his view of his job. Very enlightening on several levels.

I didn’t talk much.

How has my teaching changed from a four-year to a two-year school?

What do I plan to get involved with at CC3, if I am hired? (I honestly didn’t know. I have some ideas and I mentioned one or two, but I don’t know.)

What do I know about the school? 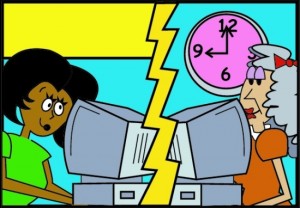 What is my position on distance learning? (Apparently this is a HUGE issue with the faculty. They hate it. Not me. I haven’t done it, but I’m not opposed to it at all.)

She showed me the pay schedule, which I had already seen because it’s public information on the website, though they hide it so you have to actually search fairly smart to find it.

We talked about computer use among students.

We talked about the writing center.

We talked about honors contracts, as opposed to honors classes. That was interesting. Any class can be an honors course. The student has to agree to be a model student for the rest of the class and has to do more in-depth/enriched work. Supposedly it’s not MORE work. Of course, I don’t see how you can do more in-depth work without it being more, but…

Then she had her secretary, who is a sociology adjunct, take me on a tour of the writing center and show me where the dean’s office was.

I had about half an hour, so I ate a bar and some cashews, drank my water, and then went down about ten minutes early to the dean’s office. (See last post.)

She told me a lot of the same stuff the president told me. She asked me a bit about what CC1 is like, what their students are like. We talked a bit about the school and how it is different from CC1.

She talked about distance learning. (I think all three of them did. It must be causing a big fuss.)

She mentioned that the developmental people are more successful in preparing their students for 1301, freshman comp, than the students who don’t need developmental.

I think she also indicated that the developmental people are more happy with their students. (Of course I already knew that.)

She asked if I had any questions.

I asked if she liked working there. I also asked something about the students. I don’t remember what.

I will say that the administration thinks more highly of the students than the faculty do. That’s good, since they weren’t too impressed. (At least not based on the phone and in-person interview.)

I asked her about orientation classes and we discussed what theirs is like (a pilot) versus the one I knew at my original SLAC. This school wants it to be transferable, which seems a bit pushy. I would think a one-hour course with introduction to academic culture and the school itself would be good. I’ll have to think about it a bit more, write it up, and send it to her.

I think I would be happy at this school and I think I could do a good job. Of course, they have to decide that themselves.

The dean said it wouldn’t be unusual to wait a week or even two and that it might be even longer before I heard. They do a background check, which I had to agree to. I would assume they also call the references at some point. The dept chair (who is only in charge of the adjuncts) has already talked to my chair at CC1.

That timeline gives me some encouragement on CC4’s position. Since I only met with them a week ago today, they might not have made an offer yet.

It’s hard to know which job I want the most, but since I’m not the one deciding, I guess I just hope it is whoever I would work with the best–and that there is a decision in my favor.

I don’t think the fact that I haven’t done distance learning was good. I did present a reasonably good explanation for it and showed my interest through information garnered from other teachers at conferences.

I don’t think I did any kind of job at all promoting my Shakespeare emphasis, which they said they wanted. (I’m not sure why they wanted it.) It just didn’t come up.

I didn’t really know what I would want to get involved with on campus. After the question I saw a sign for the Veteran’s Club. I’d like to help with that. I thought about saying something about the Hispanic club, but I’m not Hispanic and I always wonder how they would feel about that. Guess I will ask my friend who started the Hispanic club at her college.

I did overall know what kind of students are there.

I am willing to work with students on a more in-depth level.

I am willing to do distance learning. (It is a requirement, but I want to do it, too.)

I don’t have little kids, so the flexibility of the schedule isn’t an issue. They want people to do night classes and off-campus classes. I’m good with that. Shoot, I’d prefer off campus. Then I could carry.

I have a history of adjuncting within the system, so I know what a community college is like.