This last semester in Composition and Literature (second semester of freshman comp), I introduced poetry. I had a handout. I explained the handout. I went through a couple of poems fairly quickly to show how the information on the handout could actually be applied to real poetry.

Then I had the students go print the lyrics of one of their favorite songs. (I did say no extremely foul language and it must be appropriate for the university so that neither they nor I would be embarrassed if some VIP happened to show up in class.)

I told them to make four copies.

When they came to class, I had everyone turn in one copy. Then I had them trade copies with three other people. Everyone was reading three people’s favorite lyrics.

Then I had them take the handout and see what in the handout was applicable to the lyrics they were given. This was an hour and a half class and that took about an hour.

During that hour I rapidly read through the lyrics myself, noting one or two particularly poetic lines and identifying those. Then in the last half hour of class, I read the poems aloud as poems. 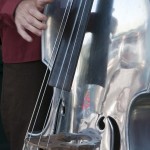 I only knew one of the songs, so my rendition did not echo the music of the songs. The students thought my readings were hysterical. They laughed outright at some of my readings. Sometimes I interpreted the poems in a way totally alien to their reading of the lyrics.

This one day exercise, I believe, gave my whole poetry section more efficacy. The students saw that they already liked poetry, in the form of lyrics. I approached their poems with the same effort (if not enthusiasm) that I gave to literary poetry. And the students had fun finding poetic examples in lyrics many of them were familiar with.

Note: This was a class of 25 students and no one brought in the same lyrics.

Second note: This was a class of 25 students and only one student brought in lyrics to a song I have ever heard of.

I came to this exercise through the presentation of Donna Jarma from OKC at Two-Year College Association, Southwest, last October.

She is much more musically inclined and pop culturally aware than I am, so her work was far more involved and interesting. However, I believe that my class benefited from her recommendations and also we all had fun with literature. (Which is a great idea, imho.)