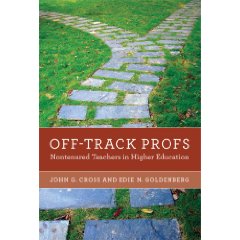 I just received my copy of Off-track Profs about adjuncts in higher education yesterday.

I’m apparently a little behind in my reading because I saw Maurice Black and Erin O’Connor’s review up on Minding the Campus. It’s called “The Ominous Rise of The Adjuncts.”

Just a hint to pique your interest:

When Cross and Goldenberg visited the ten elite public and private schools around which their study is based, they encountered deans, provosts, and presidents who were not aware of the extent or nature of non-tenure-track teaching on their campus. They encountered department chairs and unit-level staff who were aware of their own local, ad hoc patterns of appointing non-tenure-track faculty, but were ignorant of the broader context or aggregate impact of those decisions. They even found that the language used to describe non-tenure-track personnel—whose titles and job descriptions vary from position to position, department to department, and school to school—conspired, on campus after campus, to blur important distinctions among instructors, researchers, post-docs, graduate students, assistant professors, visiting professors, and even staff. In other words, they found that across the board, non-tenure-track faculty are retained “without meaningful administrative oversight.”

What created the problem? The sources are many and varied. Ill-conceived budgets and measures aimed at cost effectiveness play a predictable role, as do the expense and inflexibility of tenure-track positions.

I’m going to get reading on that.