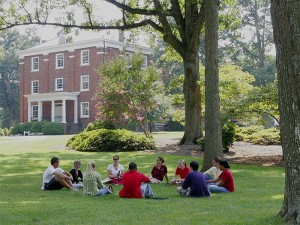 In such a climate, it is not surprising that applications to some community colleges and other public institutions have risen by as much as 40 percent. Those institutions, particularly community colleges, will become a more-attractive option for a larger swath of the collegebound. Taking the first two years of college while living at home has been an attractive option since the 1920s, but it is now poised to grow significantly.

The Chronicle of Higher Ed

CC1, at which I have taught for the last seven years, is not growing. In fact, some adjuncts have been phased out this past semester. That is, they were told they would not be re-hired. Some of the classes that remained on the books, taught by adjuncts, are not full.

Now, it is true that I live in Texas and we were not as badly hit by the economic crisis as other places. But why would our enrollments be going down? That doesn’t make as much sense to me.

The article continued with:

With a drift toward higher enrollments in public institutions, all but the most competitive highly endowed private colleges are beginning to wonder if their enrollments may start to evaporate. In an effort to secure students, some institutions, like Merrimack College near Boston, are freezing their tuition for the first time in decades.

Okay, perhaps I live in an alternate universe.

The SLAC where I teach has grown its enrollment by 10% this year, even with a 25% tuition increase that took place June 1.

Two former college presidents, Charles Karelis of Colgate University and Stephen J. Trachtenberg of George Washington University, recently argued for the year-round university, noting that the two-semester format now in vogue places students in classrooms barely 60 percent of the year, or 30 weeks out of 52. They propose a 15-percent increase in productivity without adding buildings if students agree to study one summer and spend one semester abroad or in another site, like Washington or New York. Such a model may command attention if more education is offered without more tuition.

SLAC did have school year round. They recently switched to the semester system, with great grief for students and teachers who were used to the other way. 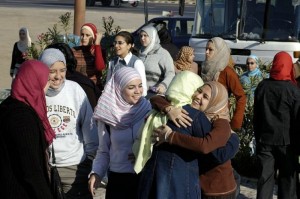 Yes, this is true. My alma mater had hundreds of international students, since it was alphabetically at the top of the list and had an easy access policy.

A friend in Africa just had 52 students come to Arkansas to attend college there.