A previous boss had an unwritten late policy. The written policy was absolutely no late work accepted. Once we collected the papers for that week, we would tell students who didn’t turn it in (or if someone tried to turn it in late) to go talk to him.

He would tell them that he would make one exception without penalty. For the rest of the term, if the student didn’t turn in everything else on time, not only would he not accept that new paper but he would take away the points on the first late one he accepted, also.

As far as I could tell, the policy worked very well.

Written by Alan, LarryC, a famous historian with books on Chronicle’s forum. 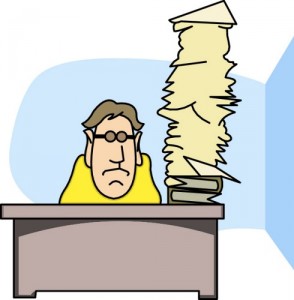 I like this idea. One of my colleges has a written “no late work” policy, but then lets students make it up.

I did the “one late paper” thing, but then people blew one assignment off.

I don’t know. This sounds like it might be a good idea. Holds to the point of the rule, without being in love with the rule.

And since I will have 150 composition students this fall, I cannot afford late work.

Thoughts on my new policy:
No late work accepted. Or say I will accept one late work? Or none and hold to that?
No make-ups of quizzes.
No make-up of homeworks.
I need to take attendance every day.