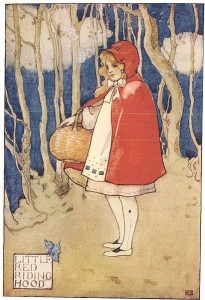 Found this while I was looking for sexual connotations of tooth. “Sharpest tooth” is not clearly sexual in its original form, but it does tend one to think in that direction.

Little girls, this seems to say,
Never stop upon your way,
Never trust a stranger-friend;
No one knows how it will end.
As you’re pretty so be wise;
Wolves may lurk in every guise.
Handsome they may be, and kind,
Gay, and charming – never mind!
Now, as then, â€˜tis simple truth –
Sweetest tongue has sharpest tooth!

I was fascinated by this poem and even more by the fact that it was present in the original version of Little Red Riding hood written by Charles Perrault, written in the morally decadent period of King Louis XIV.

Just one more reason fairy tales are so fascinating.

I would include the movie referenced in my discussion of contemporary uses of fairy tales, but I am fairly sure most of my students would not consider a movie that came out before they were born contemporary.