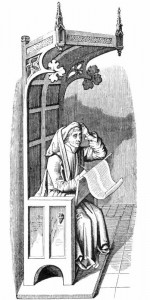 Why fantasy is religious

…religious discourse has become alien to the secular and sceptical [sic] western societies of the twentieth century. There is real discomfort when religious discourse appears either in the popular press or in literary representations. Believers become marginalised in society. … But even in a secular society, there is still a psychological need (one might even use the stronger word will), if not to believe, then at least to hope. …this need is met in the literature of fantasy.

Twentieth century fantasy has emerged from a long tradition of religion and philosophy, and it has adapted itself to provide gods and heroes whom readers might worship and in whom they might transcend themselves. I do not argue that the literature of fantasy is ‘about’ religion; rather my argument is that fantasy speaks religion, that it operates in the same space and uses the same devices as the discourse of religion and does so largely to the same end: the articulation of hope. (Filmer iii)

The angst of this secular, nihilistic age is explored in the growing number of science fiction and fantasy texts which address, as worthwhile fantasy has always done, human concerns, psychological and spiritual. Within the constraints of these genres there is now a discourse which addresses itself to these concerns in a manner which suggests that religious discourse has been displaced from its contextual siting in the social rituals of worship to the private experience of engagement with a written text. I do not mean to propose that the authors of science fiction and fantasy texts are “putting religion into the story,” as it were, although it is clear that some authors do so. Rather I believe that the discourse of the fantastic is itself a form of religious discourse, with all the features of didacticism, persuasion and emotive language which have traditionally been associated with the discourse of religion. (Filmer)

…the literature of fantasy and science fiction has a significant part to play in the religious concerns of the late twentieth century, and that the discourse of religion, marginalized not only by a consumerist and materialist society, but also by the anti-theological discourse of certain contemporary literary theories, is legitimized in these genres. It is said that energy never dissipates, but merely changes its form; so the linguistic expression of the most profound human needs is displaced from religion to literature, but to a certain kind of literature which makes available the symbolic forms by which ontological and metaphysical concerns might be addressed. (Filmer 5)

…while fantasy also “deconstructs” and undermines certain assumptions about the world, it also sets in place a new iconography of the sacred which in turn subverts the sceptical imperative which many believe lies at the heart of fantasy literature. (Filmer 7)

What fantasy literature does, then, is to instigate a process by which ‘suspended’ belief can be accommodated, and if belief is not fully recoverable from the experience of reading, then at least it can be compensated for by the articulation of hope. (Filmer 8 )