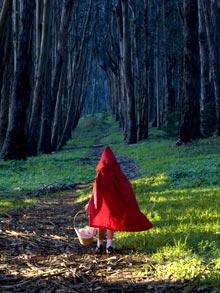 The Telegraph article “Fairy Tales Have Ancient Origin” has some interesting points. First, though, let’s be clear that the post only talks about Little Red Riding Hood type stories.

Dr Jamie Tehrani, a cultural anthropologist at Durham University, studied 35 versions of Little Red Riding Hood from around the world.

Whilst the European version tells the story of a little girl who is tricked by a wolf masquerading as her grandmother, in the Chinese version a tiger replaces the wolf.

In Iran, where it would be considered odd for a young girl to roam alone, the story features a little boy.

Contrary to the view that the tale originated in France shortly before Charles Perrault produced the first written version in the 17th century, Dr Tehrani found that the varients shared a common ancestor dating back more than 2,600 years.

He said: â€œOver time these folk tales have been subtly changed and have evolved just like an biological organism. Because many of them were not written down until much later, they have been misremembered or reinvented through hundreds of generations.

â€œBy looking at how these folk tales have spread and changed it tells us something about human psychology and what sort of things we find memorable.

â€œThe oldest tale we found was an Aesopic fable that dated from about the sixth century BC, so the last common ancestor of all these tales certainly predated this. We are looking at a very ancient tale that evolved over time.â€

I’d be interested in how he decided those tales were related. Is it simply a child in a forest?

Both the quote and the picture are from the Telegraph.