When asking students to write a new kind of paper, I try to give them a visual metaphor that lets them see what place this paper would hold. 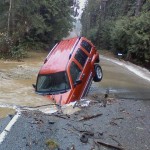 I also explained that while it would be totally cool if some of them were able to write that kind of a literature review, I did not actually expect it of them. What they should do, I told them, was to write a literature review to describe the road. They’re new; they don’t know where they are going. Their lit review should tell me what road they are on.

They laughed. But I hope it got through to them.

I also explained it another way. I told them if there were almost no papers on their topic, even with good search terms, then it was possible that they were at the top of a mountain where the snow is melting and starting to form a stream. It’s very cold and lonely up there, but they can hop right over that stream no problem.

If, on the other hand, there are thousands of papers on their topics, even after narrowing, they’re now trying to walk across the Mississippi in full flood. I asked them what would happen. They said they would drown. Exactly! So the lit review for them is supposed to make a little dam that slows part of the water down enough for them to be able to join the conversation.

I don’t know if those metaphors helped or not, but it was an interesting day.

The picture is from Mopo.ca..