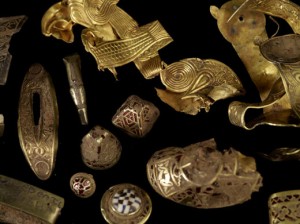 It’s the largest hoard ever says the Guardian.

A harvest of Anglo-Saxon gold and silver so beautiful it brought tears to the eyes of one expert, has poured out of a Staffordshire field – the largest hoard of gold from the period ever found.

The weapons and helmet decorations, coins and Christian crosses amount to more than 1500 pieces, with hundreds still embedded in blocks of soil. It adds up to 5kg of gold â€“ three times the amount found in the famous Sutton Hoo ship burial in 1939 â€“ and 2.5kg of silver, and may be the swag from a spectacularly successful raiding party of warlike Mercians, some time around AD700.

The first scraps of gold were found in July in a farm field by Terry Herbert, an amateur metal detector who lives alone in a council flat on disability benefit, who had never before found anything more valuable than a nice rare piece of Roman horse harness. The last pieces were removed from the earth by a small army of archaeologists a fortnight ago.

This picture is from the Guardian.