I am thinking that “special knowledge” includes having read Latino/a literature and having a syllabus. So I am putting together a syllabus. We’ll see how quickly that takes shape. I know more poetry than anything else, but I would like to include poetry, short stories, novels, autobiographies, and biographies. (I know those are a little more questionable, but Beth Jones has a good one entitled “The Professor is a Drop Out” about Dr. Quintanilla of University of Houston.)

These include an interesting collection of Quechua, English, and Spanish versions of poems from the Andes.

Emory has a good introduction to Magical Realism.

A syllabus for a course which “offers an overview of the history of Latino/a literature, introducing the major trends and placing them into an historical framework stretching from the nineteenth century to today. Emphasis will be on similarities and differences in the experiences in the United States among different Latino/a groups.” It’s an interesting grouping.

The modern primary texts are:

Another syllabus gave these works:

Zoot Suit, a play by Luis Valdez (based on a true story)
The Milagro Beanfield War, by John Nichols (based on a true story)
Caramelo, by Sandra Cisneros
How the Garcia Girls Lost Their Accents, by Julia Alvarez
Dirty Girls Social Club, by Alisa Valdes-Rodriguez
When I was Puerto Rican, by Esmeralda Santiago
When the Spirits Danced the Mambo, by Moreno Vega
Breath, Eyes, Memory, by Edwidge Danticat
The Devilâ€™s Highway, by Luis Alberto Urrea
Tortilla Curtain, by T. Coraghessan Boyle

Still another syllabus offers these texts:

–In the Time of the Butterflies by Julia Ãlvarez.
–Latin Deli by Judith Ortiz Cofer
–â€¦And the Earth Did Not Devour Him by TomÃ¡s Rivera.
–Dreaming in Cuban by Cristina GarcÃ­a.
–The House on Mango Street by Sandra Cisneros. 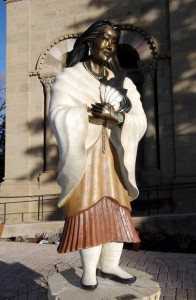 This syllabus has an interesting goal: “Our goal is to use literary and cultural theory to understand the paradox inherent in US Latina/o culture; that is while Latina/o culture is increasingly diverse in terms of its contributors, the culture also reveals similar experiences within itself and in comparison to Anglo-American life.”

I think that would be odd to work within. So, in How the Garcia Girls Lost Their Accents there are sisters, conservative parents, an oldest sister who analyzes everyone… All those things could be true of anyone.

The works for this course are:

Despite the fact that the syllabus says they will be working with music and other forms, there are none on the list or the syllabus.

Ah, I found another syllabus with an interesting list.

I think I would like Mi Voz, Mi Vida: Latino College Students Tell Their Life Stories. It would fit with the autobiography part I’d like to have.

I found a different syllabus with an interesting set of secondary texts, for interest.

AcuÃ±a, Rudolfo: Occupied America: A History of Chicanos
Aranda Jr., Jose: When We Arrive: A New Literary History of Mexican America Extinct Lands,
Brady, Mary Pat: Temporal Geographies: Chicana Literature and the Urgency of Space
Paredes, AmÃ©rico: Folklore and Culture on the Texas Mexican Border (This sounds interesting to me, but is not available new. If I end up teaching the course, I will definitely purchase it.)
Paz, Octavio: The Labyrinth of Solitude
SaldÃ­var, RamÃ³n: Chicano Narrative: The Dialectics of Difference
Torres, Eden: Chicana Without Apology

It’s obviously an upper division course, but I like a lot about the syllabus. I might be able to adopt the approach, though I would amend it slightly.

Latinoteca has a well developed list of suggested readings for a survey course.

In the section on Latina literature I found this list:

Also in that section are articles that look interesting. A few are:

I am particularly interested in the Johnson article, but there is no listing of Smith and Johnson.

You insult me
When you say Iâ€™m
Schizophrenic.
My divisions are
Infinite.
Bernice Zamora, â€œSo Not To Be Mottledâ€

One thought on “Resources for Special Knowledge: Latino Literature”