Violence and Weaving in Riddle 56
Megan Cavell did an excellent job on this presentation. It made me glad I had seen Christina Petty’s presentation earlier. (Which reminds me I meant to ask her for a copy of her powerpoint and paper to borrow for class.)

This is a picture of a warp-weighted loom from AllFiberArts.com. 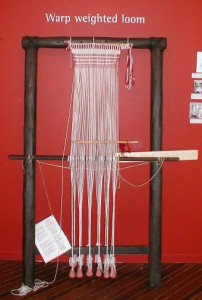 It is an odd thing that violence is so strong in the riddle. And she talked about that.

Unfortunately, I don’t know this riddle and the numbering doesn’t match the version I use in class, from Kenyon.

So, despite the fact that I marked it to use in class, I don’t know how… I could just use her version and say it’s a different numbering from the other. That would work.

I learned that Margaret Hoffman is a loom historian.

Ms. Cavell asked if the poem was a gender inversion or a class inversion and finally developed the point that weaving is an heroic action. In a culture where the hero is valued that is particularly significant.

Beaters resembled swords. Some were made from swords and some were reconstructed into weapons of war. (Reminded me of the biblical quote from Isaiah 2:4, “They will beat their swords into plowshares and their spears into pruning hooks.”)

Ã†lfric’s homily links hanging to weaving.
linked battle, hanging, torture, gallow’s death
The cross is called a gallows three times in OE.
The poem recalls the stoic acceptance of pain as part of the OE portrayal of saints.

So the poem transgresses genre, moving into an heroic tale.

So the artistic construction imagines God in their own image, that is weaving equals Jesus’ crucifixion.

Note: aesch made by alt+’ on a Mac. Thanks to Wodenhelm for pointing that out.