I came to this talk because I expect it to be on pedagogy. I hope it will be. (It was, though not all at my level.) I am looking for ideas that will help my teaching.

Some of the presentations here are much more theoretical. I might be more inclined to go to those if I were doing a lot of non-pedagogical research. Right now, though, Iâ€™m going with pedagogy. 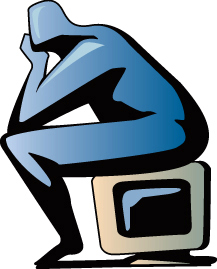 Note: He spelled the word they created multiple ways. Twitterive and Twitterative. I have no clue if those are two different things.

Twitterative (students’ created definition)
multimodal narrative that emerges from a collection of personal tweets and Twitpics
Multimodal: â€œtexts that exceed the alphabetic and may include moving images, animations, color, words, music and soundâ€ (Takayoshi & Selfe â€¦)

None of students were active users. 5 had before.

Constructing a Twitter Community:
reserved a computer lab
set up accounts
-talked about privacy settings, background, photo, bio
-followers of each other
-set up Twitpic
Discussed etiquette and language and courtesy

Our Twitter community
public v private
identity construction
language and symbols
(Could students drive the community? If prof is facilitator, what happens?)

How does character limit change the writing?

4 phases
tweets and Twitpics
collaborative workshops
composing the narrative
writing the critical analysis
Planned as one week sections. Instead it ended up being four weeks on all of this.

Tweets: Vignette/Memoir
Examples:
â€œidea for narrative: detective report, found diary, historical document for interpretationâ€¦â€
In analysis:
I started the first draft with the idea of turning tweets into a detectivesâ€™ report of my activities. I realized the narrative was going to be boring â€¦ decided to explore the vignette format..
51 tweets/recurring themes
stream of consciousness contrasted with short/clean sentences

On this day, as I waked my dog, I observed the entire holy familyâ€¦ neatly piled up and placed at the curbâ€¦

Dated March 26, 2009- still trying to figure out what the hell Twitter is
August 19 posted once
So had tried it, didnâ€™t like it, but began to appreciate it through the community of classroom
Sheâ€™s talking about how she did her design.
â€œthat sounds like fun. This is the girl who sits next to me in class, right?â€

Example: Picture a Hiro
getting stuck
having trouble writing
takes pictures of her cat
came up with idea: Hiro (cat)â€™s Personal Ad
â€œI could write a narrative from his point of view and a detailed description of his life.â€

Example: Photos Tell a Story
struggled with focus
many conversations on that
why not take pictures?
Do a photo essay
What she found was that a lot of her pictures revolved around a student of hers.
She wrote about her student, age 4, from that studentâ€™s perspective.

Observations
Many students donâ€™t continue to use Twitter. Some do.
Conventional rhetorical principles (Selfe, 2007, p. 5)
exert their own agency (Hawisher, Selfe, Moraski, and Pearson, 2004, p. 666) 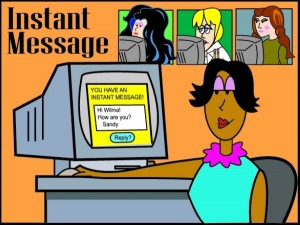 Study explores the impact of social networking on academic socialization.

Questions
What are students doing with literacy? What are they gaining? Are there any negatives?

20 students, PhD
average length of time in US was 3 years

How does it transfer?
â€œineract, when we had to do somethingâ€¦ I think I improved my writing skills and the use of informal register.â€

Lots of commiseration and expression.
Apparently lots of them are presenting here today. 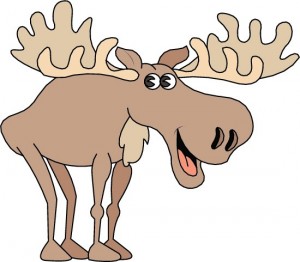 What global online networks are youth engaging in?
How influencing/influenced by pop culture?
What can we learn about literacy?
How harness those skills?

Contextualizing transnationalism online:
Black and Steinkuehlerstate p. 271
movement, moving across, between and/or among borders
Brittain p. 15

Evolution of Digital Literacies
framework of new literacy studies Street p. 77
Lea p. 230
Faigley 257 â€œpronouncements of the Internet as our salvation or our demise is that significant new practices of literacy have come into existence along with the internetâ€

Facebook is offered in 64 languages.
Playfishâ€™s Pet Society can be played in fb.
14,000,000 players
twitter feeds on this, websites, forums, blogs, and email lists
google search of â€œpet societyâ€ had 25million hits
YouTube had 20,000 videos

How online networks allow them to demand recreation of game environment to best suit the groupâ€™s needs
lobby Pet Society to get what they want.
Users quit playing game until these features are added
May create hacks or add code to a game to create the features they want, even though itâ€™s against the user license.

At the same time, they passively or actively accept some of the values or norms
consumer based culture
friending to get more coins
asking for gifts or itemsâ€”getting things from other people
buying more items and clothes for petâ€”pet wants more stuff all the time

Showed her pet.
Mimi
Pink
Las Vegas cowgirl
Has the biggest house among all her friends. When sign in, my house is 2x as big compared to students.

Create a society of its own
many profile pages fansites, forums, blogs, in multiple languages
develop new literacy practices
read and respond in multiple languages, so post in French responded to in Chineseâ€”so people canâ€™t read
Not everyone can read what is happening.

Culture in a Box
Japanese restaurant in a box.
Learning about culture through kimonos, bentoâ€¦
Not a story or not a background.

Connecting Pedagogy to Online Youth Popular Culture and Social Practices
By communicating and publishing online they â€œhave an integral, real connection to theâ€
Rhodes and Ronbolt 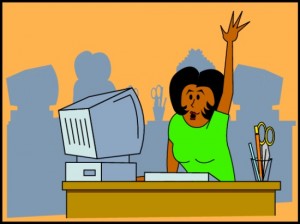 Comments
Interesting response:
bullying online
â€œYou should have said x.â€
They correct each other and discuss that.
Probably not a helping vein.

Adolescents using this.
How do you know that these are adolescents?
I looked at the profile pictures.
Some tell you how old they are.