What do you do when you thought you adequately covered a topic, but twenty papers from the class show that only one person understood even the basics of the presentation?

That’s a question I am asking myself. I changed my syllabus this year to include things that I am particularly interested in. So I had a new reading. It is the third version of the same story that we read. This is the first time I have introduced all three stories. Unfortunately, the students got them hopelessly confused.

The only student who got what all three versions were (or seems to have) also went and reread the works himself. I know this because he called to ask me about a part of the work that confused him.

I am teaching a three week class and I don’t really have time to go revisit a topic we studied the equivalent of three weeks ago. But this topic is on the final, so I don’t want to leave the students confused.

I expect that I will do number 2. However, I might do number 3, just because they might understand them better if they have to look it up. I don’t really have time to do number 1 and number 4 would require that I weight more heavily something which is already weighted too heavily.

Okay, I think I will do number 2. Then on Wednesday I’ll give them a pop quiz over the history of the works, to see if they got it.

Are you wondering what they got confused about? 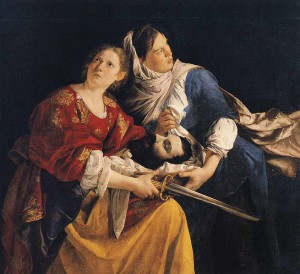 The assignment was to compare and contrast the three versions of the story.

The painting is by Orazio Gentileschi, from around 1614.