The Shadow Scholar is a Chronicle of Higher Ed article purportedly written by a ghostwriter for hire who has created theses and dissertations, as well as hundreds of run-of-the-mill term papers.

I may write about that in some other post, or not, but comment 195 caught my attention and I thought it was worth writing about here. (Perhaps a later commenter mentions it. I don’t know. I stopped at 195 to write this post.) 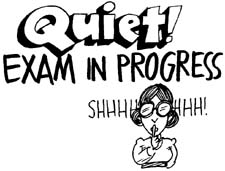 On another matter: the unedited student emails in “Dante’s” article, with their egregious problems with idiom and verb management, strongly suggest that a lot of these ghostwriting requests come from ESL/ESOL students, for whom writing fluent, near-native English is a problem, and for whom plagiarism and other forms of cheating are less of an issue in their home countries than here. This possibiliity suggests a need to administer on-grounds language proficiency examinations for all international and domestic students for whom English is not the first language and get those who need it into English remediation courses as a first order of business.

I am struggling with how to address this comment, though I have a lot of points.

Purdue University, where I received my PhD, had just this kind of writing exam. They only administered it to foreign students.

Local SLAC used to have an English entrance requirement for all their students who did not take freshman composition there. However, there was no mechanism to force the students to take it immediately and so sometimes graduating seniors were taking–and failing–it. This forced/encouraged the administration to drop it, even though it showed that the likelihood of those students having graduated without someone like Dante’s (see article mentioned above) creative connivance. Now there is no requirement for English ability.

FinalCC, the college I teach at now, could really benefit from a writing component or writing test like this one. However, I would suggest/petition that it be a placement exam for all entrants rather than just ESL. I think many of our students, coming in from area high schools, are singularly unprepared for writing.