Jack Zipes’ article in The Globe entitled “Why Fairy Tales are Immortal” is an interesting read. 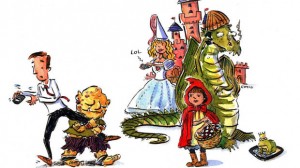 The art, by Craig Terlson, is eyecatching, so I reposted it here as well.

A small snippet of the article:

Like most popular art forms, the fairy tale adapted itself and was transformed by both common non-literate people and by upper-class literate people. From a simple brief tale with vital information about human preoccupations, it evolved into a volatile and fluid genre with a wide network. The fairy tale grew, became enormous and disseminated information that contributed to the cultural evolution of diverse groups.

In fact, it continues to grow and to embrace, if not swallow, all types of genres, art forms and cultural institutions, and adjusts itself to new environments through the human disposition for narrative and through technologies that make its diffusion easier and more effective. A vibrant fairy tale has the power to attract listeners and readers, to latch on to their brains and become a living force in cultural evolution.