Wm. Tooke was a London solicitor, amateur editor. Published in 1804 in London.

Tooke may have annotated with a new criterion: famous stuff. Persons discussed on professional press. Bases annotations on what is written in the press of the era.

Rationale for annotations is strikingly modern. First sentence gives Tooke’s reasoning. Tooke wanted to encourage understanding. Annotator should provide info about persons and texts, once common knowledge for author’s first audience. “to enable modern readers to read a book as its original audience read it” (Jack on annotations)

Churchill often emended his poetry to add scandals to his poetry. 5 of 8 editions of one poem, for example, were enlarged 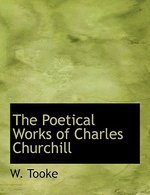 Tooke seeks to restore to Churchill’s name with its celebratory.
People kept reading Churchill after his death in 1765.
Book seller John Bell published his work as terminal volume in 1779 (after copyright ended).
Churchill’s work was the most borrowed from the ?London library.? (not sure that was where he said)

Tooke’s plan is to make the poet the topic of discussion as he was originally.

Churchill wrote of others’ scandals and had the experience of reading sensationalized accounts in papers like the Public Advertiser.

Tooke’s logic in editiing is that it would remind later readers of the earlier scandals. Tooke indicates he is giving what used to be notoriety. Readers only knew what was well known. Tooke’s business was only to re-educate for notoriety, things people all knew when the earlier readers read Churchill’s poems.
Tooke compares his annotations to other’s annotations, infamous for info on esoteric subjects.

Fame was created by newspaper press.
Tooke only included notes that were in multiple periodicals, not something in a single publication.

Logic of Tooke’s approach is clear. Readers in 1761 would have known what was in the paper, via tavern and coffee houses. Even if it was exaggerated or inaccurate.
Tooke included much that was inaccurate, based on modern scholarship. (Ex: Churchill rejected from university because could not read Latin.)
Tooke identifies allusion to “disinherited son” refers to one person. Other annotators disagree. But the disinherited son was most likely, by the public, to be the son of the Archbishop of Canterbury. They would have known of him, but not whoever Churchill was referring to.

Tooke doesn’t have prudery. Brings up a sodomy scandal (after C’s death) of one poetry’s topic. So chronology inaccurate, but not prudish.

Tooke said he would not discuss private issues, unless they were significantly notorious in the press.

Reveals about modern theories of annotation:
recovery of past knowledge
modern standards of factual accuracy