Lan Dong, U of Illinois: Springfield
“Beyond Genre: Autobiography, Cultural Memory, and History in Comics” 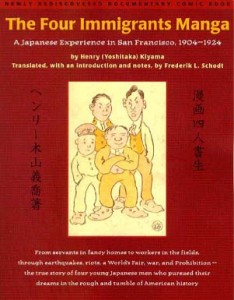 In 1924, before the Immigrant Act, one of the characters heads back to Japan to visit.

Political hatred of Japanese immigrants. Different political awareness among Japanese-Americans. Attentiveness over racial segregation in San Francisco schools. Father of American-born children, the immigrant says he doesn’t know what he is talking about. Discussion of American view of Asian students in the 1920s.

Narrator. Use the narrated I. The version that the narrating I chooses to constitute. At times Kiyama comments on the characters. “The cartoonist of this strip will fix things up for you.” 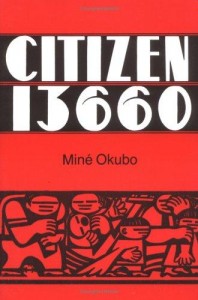 Okubo does something similar.

As war is declared on Japan, newspapers are being sold. The Japanese character is reading the paper. Most are ignoring her, but one is peaking over his shoulder at her.

In a bus or train window, the passengers are looking at her from all directions. The historical facts of the forced and orderly evacuation is dry. The emotional isolation of the character in the middle of the travelers is strong.

There is disjunction between the pictures and the text.

There was a mass evacuation of the Japanese from the West Coast. The character goes to the church to register. They character and her brother as well as their luggage all have the label 13660. Their surname and identity is replaced with five numbers.

120,000 Japanese-Americans
Official sanction against photos of the camps.
Her goal is to keep a record. Notable witness to what was going on at the time. Documents a specific chapter of the work.

Character is both the I and the eye. She is both observer and participant. In one picture she sits on rooftop. She can see the whole camp. Characters in camp are of different ages and gender. They are all overseen by guard towers. “We were close to freedom and yet far from it.” 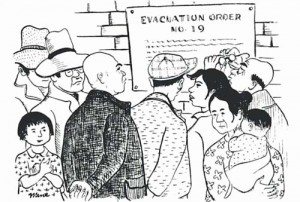 Identity erasure happens on multiple levels. The units in the barracks look all the same. The crowd gathers at the mess halls. There are no supplies in the store. Apparently the people had limited type and color of clothes. Everyone was dressed alike. Three women are dressed in exactly the same clothes.

Reflects artist’s experience and documents the past. Aspires to the status of objective knowledge.

Both authors challenge definitions of history and autobiography.