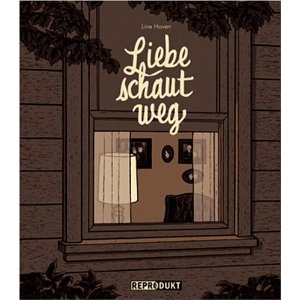 Begins with the “Ultimate Graphic Novel.”

Use the graphic narrative. Novel says it is fiction.

Liebe schaut weg (Love Looks Away) deals with American and German family. Although the cultural gap is significant within the text, the work itself meshes the two cultures into a graphic narrative.

In France, Belgium graphic artists important.
German attitude is negative. 1953 no distribution of comics. Laws against “dirt and smut” had as their main target comics.
In the vein of Marxism, comics were alienated “mass drawing” intended to keep youth from standing up for their rights.

Born in 1977 she was a set designer. After she was asked to draw comics by other students, she began to study under Germany’s main comics professor. 2008 won Best Comic. 2010 won Young Graphic Artist award. Graphic narrative has been published in Italian. Soon will be published in English.

She works with cardboard, images in black and white wax. “Scraper boards.” Her work is not horror (the main users of scraper boards.) 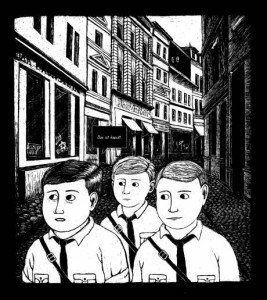 1. Mendelssohn. A Nazi youth listening to music by a Jewish composer on an American radio station.
When he listens again, he questions the regime.
2. Baby, it’s cold outside. Two youths in Michigan meet on the ice skating. Harold finds out he has TB and cannot go to war. Katherine is a pacifist. Radio lets us know that the pictures are during war.
3. Escape to the future. West German economic boom of the late 1950s. His money is spent on sci fi magazines. Witness a launch of American rocket. “Where else do they want to go? To the moon? These Americans!” Begins to work his pulp magazines in English: Ray Bradbury, Robert Heinlein. 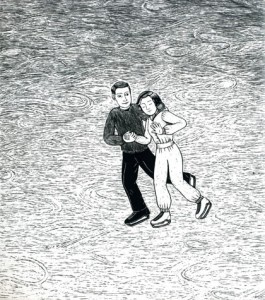 4. Come Closer. Katherine and Harold’s daughter goes to study in Germany. The two meet and fall in love. Harold refuses the boyfriend’s request for the daughter’s hand. There is a clash of civilization. Restaurant dinner. Mothers are talking. Families separated by the gulf of the seam. The daughter acts as a go-between in the two languages. Even though he read scifi, he doesn’t answer her in English ever. She is the only character completely at ease in both cultures.
5. ?
German husband feels out of place in US, even though he is a doctor. She and her children walk down the street. “When are we going to go home?” child asks. “We are home,” their mother answers in English.

Completely bilingual. Hybrid of both cultures.
Historical background. Rarely referred to, but the experiences effected.
Perceived as if the story is a memory.
Memory can be problematic.
In the family photograph albums, some pictures have been removed. The doctor boy’s family removes their first meeting. It was at a Hitler Youth meeting.
Here she is a character in her own work. Episodic approach.
Final dialogue did occur. This is a re-imagining of the family history.
The scraper board shows her revealing history.
Adequately representing past events.
How to deal with these issues in the graphic novel?