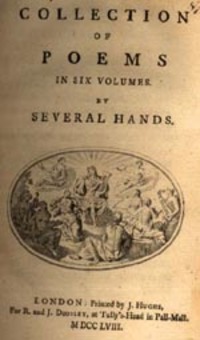 Literary textbook.
1st edition, 1748
12+ pages of maps and handouts
12 shillings, half a pound (footman would make 8 pounds a year)

Dodsley collected works of scholars, including Jonson who wrote the preface.
Very popular. Still being published 50 years later. Abridged, plagiarized, and reprinted in US and Britain. All the Adams’ family read it (John, Abigail, John Q). Used at Penn and Columbia. Long duration and afterlife.

Work for middling classes.
Statement of what it is not. “unpleasing or obtruse, rarely accurate… to life”
Drawn up for readers inexperienced with life.
Nothing unprofitable included.
Pleasure in learning (idea of Locke) is to be encouraged. But middling folks need to know which will be profitable. (Consumer approach to education begins?)

editor figured as ideal source to choose for those passive consumers, those who want familiarity with the arts but do not contribute to them

How does an editor whose labor is literature construct English studies?

What sections were English studies?
1. reading, speaking, and writing letters
5. rhetoric and poetry

Why were these separate?
Pt. 1 practical and included models
examples for the general business of life
“Every man has frequent occasion to… make narrative…”
Tolls the death knell of the rhetorical imitatio.

Who wrote these specific sections?

Author of intro to Pt. 1, Reverend Mr. Mason, dissenting divine, “On Self-Knowledge”- one of most popular works for self-help
Mason’s work which is used in Pt. 1 was already a text at Oxford.
Dodsley identified the author in a footnote to the text.
Mason did not give Dodsley permission; in fact Dodsley did not even tell him he was going to use it.
Treatise published by Mary Cooper. She would have to give permission. She may have given Dodsley permission. They shared a lot.
It is notable because Dodsley didn’t often identify the authors.

Pt. 5, rhetorical figures and poetry
So it’s poetry that uses rhetorical figures.
Emends classical ideas with mostly modern authors.
About half are Shakespeare. The rest are poets that Dodsley published already. It promoted Dodsley’s stable of writers.
Writers he included were friends, colleagues, and collaborators. It wasn’t just that he made money. Art and commerce did not need to be desegregated.

Google Books has been very useful in finding the authors who were used in the Preceptor.
We might know more than an 18th C reader would.