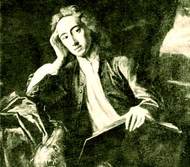 Textual history of Pope’s letters to Cromwell
sit on the shelf in England
friends from 1718ff.

Most of the papers were published by Edmund Curll in three different times.

Curll’s legacy had a motive
Curll issued a pristine text, without significant emmendations.
Pope issued an authorized edition that had to change the original texts.

Curll used
1. square brackets at catchwords (1726 Miscellania)
with only 3 exceptions
inserts footnotes and marginalia
2.
Transferred postscript from an earlier letter- Pasted slips
letters were edited after they were sent- Who edited them?
3. title pages
4. corrects spellings and uses modern English letters, no long s

Pope omits phrases from his own texts. He uses Curll as his base text. Curll takes liberties, but Pope is unable to change them back to the original. He doesn’t know them.

Portrait in the picture.
Penmanship on the page under picture.
Pope was sensitive about his body. Never seen in pictures standing, if he had a choice.