David Riggs, Stanford U, “Shakespeare at Thirty”
recently retired
author of Ben Jonson: A Life and The World of Christopher Marlowe 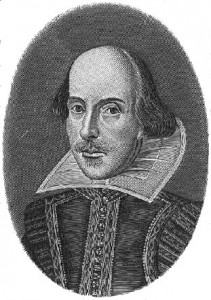 Marlowe wrote poem, Countess of Pembroke “capable of excelling”
“accustomed to bring forth”
poet in midcareer
Shakespeare had the same idea, “Venus and Adonis”
letter dedicating to Earl of Southampton
poet in midcareer

Shakespeare says he will give, if the earl does. The earl does. Then more gifts and more poems come forth. (“The Rape of Lucrece”)
“What I have done is yours, what I have to do is yours.”
No plays were dedicated to nobility. Plays were for consumers.
Poems were part of reciprocity. “A man ought to be a friend to his friend and repay a gift with a gift.”
Greenblatt says that Elizabethan writing is florid. Most people wouldn’t mean what they said.

His acting companies went under.
But “Venus and Adonis” found critical acceptance. Literary folks were appreciative.
Entered many editions.
“The Rape of Lucrece” did as well.

Marlowe in “Rape and Leander” Leander’s drawn-out advance…
rapist likens himself to a writer, writing words on a page
pen and penis analogy

Her body’s stain her mind untainted clears;
While with a joyless smile she turns away
The face, that map which deep impression bears
Of hard misfortune, carved in it with tears.
‘No, no,’ quoth she, ‘no dame, hereafter living,
By my excuse shall claim excuse’s giving.’

vogue of neoclassical tragedy was owed to Lady Pembroke, “muse of the poets of our time”

“Lucrece” invited folks to compare his work to Marlowe. Joined discussion with Augustine on whether anyone could kill themselves morally.

Entering the Lord Chamberlain’s entourage brought him money. He was able to buy a house.
Shakespeare was going to abandon his poetry.
The new company did possess one redeeming virtue. Popular plays… venerable warhorses… Shakespeare to revise and expand.
Acting posed an obstacle to his professional position.

In the privacy of his sonnets, Shakespeare acknowledged his limitations experienced by acting. He could not write while being a full-time actor either.