Ronald Ganze, U of South Dakota, “Conceptual Blending and Beowulf“

Retrieving the Medieval Self, 2012 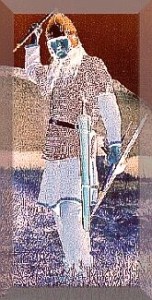 Two things conflated into one.
Conceptual blending.
A-S Turner provides this on “The Dream of the Rood”
sinful humanity with sinless Christ, Cross with a thane’s life
“It [Dream of Rood] offers a complicated blend” –Turner
Though somewhat lacking to the traditions, it is in keeping with the standard understanding of the poem’s purposes.
Those poems which are allied with Christian structure are most successful.

Values of roles
Blend integrates the frame in the simplest way. Cannot have two things which are incompatible blended.

Do not be like Cain, who belonged to the evil one and murdered his brother. And why did he murder him? Because his own actions were evil and his brother’s were righteous.

1607b
Poet remarks
intial reference to father
poet reminds the audience of God of Christianity, despite the characters cannot understand this… (Why not?)

Why do they not have a possibility of a blended space? Why could the characters not have known about Christianity?

melting of the ancient sword
juxtaposes Christian and character’s views.

Character references
I don’t think they are Christian.
Similar to Robinson.
Poet takes advantage of OE words that were later signified in Christianity.
original audience would have understood the characters were pagan
I believe Robinson to be correct.

melting of the ancient sword- poet
Beowulf when he relates his fight to Hrothgar
“meet, measure out” or God (same word)