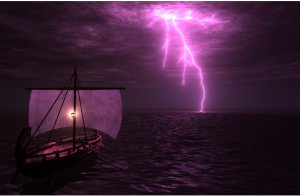 Perception is tied to wisdom.
Augustine inner eye of soul
Boethius Lady Philosophy references eyes and sight
Odin trades one of his eyes for knowledge

The Wanderer is a paradox of simplicity.
“essential obscurity”
resents critical attempts to establish a stable meaning
resists because it has weak shapes, which encourage an affective response

lots of theorists that I don’t know (Sorry)
Gestalt Theory
psychological organization will always be as clear as circumstances allow.

Objects which are of the same form, color, or size seem to be a single thing.
“Convergent poetry” marked by clear cut shapes, in content and structure. Inclined toward an atmosphere of certainty.
“Divergent” blurred shapes. General tendencies. Atmosphere of emotional volatility.

TW is divergent.
Imagery of the poem: Walls and Water
44-48 fallow waves, spreading feathers, falling frost
Difficult to see clear lines. Birds are bathing, not clearly differentiated from the water. The water, the snow, the cold resists confinement.
“Winter sorrowful in his frozen spirit enclosure” His thoughts join the winter weather.
Walls 4x, rocky cliffs once, work of giants once, house once.
Water, frost, hail erode the boundaries of human society.

“so spoke” 2x
Ambiguous. Two speakers.
Both concerned with heroic efforts and speech.
“become facets of a single consciousness”
“Reader does not know by whom he/she is being addressed.”

Time is subjected to the same fuzzy boundaries.
Memories are often described in the present tense themselves.
“Sorrow is renewed…”
Blurring that occurs is largely temporal and physical.

What “therefore” is referring to is never quite clear. Does the word mean when or then? There is obscurity of the connectors. Enhance ambiguity in TW.
Double-edgeness: phenomena that given element can give rise to opposite effects in different forms
Temporal and logical connectors, usually coherent, in divergent make incoherent.

Every moment sensory overload.
Minds pick up stable ideas and the rest is dumped into background.
“precategorial mass” undifferentiated blur resists attempts to categorize
divergent poetry is inclined toward emotional quality. Which emotion?

TW similar to Ecclesiastes.
Ecclesiastes structurally and thematically similar. Not parallel to but heavily influenced by. Ecclesiastes dark book, wise speaker. Book’s atmosphere is one of sadness and despair.

Michael D. Fox biblical scholar “importance of contradictions”
“sticking point is a feeling that something should not happen” existential contradiction
one sinner destroys good things- Eccl. 9:18

Two descriptions of fate. Fixed and immutable. Agent of flex and change. 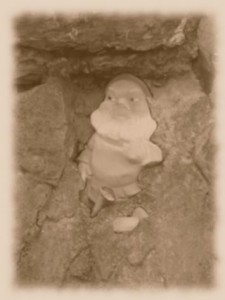 Experiential knowledge of a world that does not make sense.
Same purpose of obscurity in Ecclesiastes. To explore the experience of wisdom.

Dwarf, All-Knowing challenged by Thor. Then sun comes up and the dwarf is turned to stone. Dwarf’s wisdom does not save him from defeat.

“he who experiences it, knows.” x2
experiential knowledge
absent from their social context so they have an awkward fit

A maxim tied to social experience that is left behind, koan.
First half of pagan and leads to wiser, Christian half. –Huppe.
Gnomes are Christian. Do not disappear over the course of the time.
Not religious propaganda.
Nor is it rationalization of clichÃ©d teaching.
What is most absorbing about TW is the journey itself?

Wisdom is tied to sight. Where sight is blind, understanding limited.

The photograph is from AmericanDigest.com and the dwarf is from an-over.com.