This was one of the early presentations I went to. I used paper and pen note taking for it, so I am transcribing this onto the blog.

literaturing composition
This was a phrase they wanted to use to talk about their topic. I believe that they want to suggest that we should write in a more accessible manner. I am not sure that literature is really that much more accessible to the general public than academic writing.

English graduate students take 9.3 years to earn their PhD. Imagine that! I took longer, just under the 12 year wire. But I also had a tenure-track position, got married, and had two children in the middle.

Humanities is conflated with university itself, says Derrick Bach.

People divide in what they talk about:
1. causes and blame
2. labor and curricular changes
3. unionization

We are all highly trained in research and rhetoric.

We need disciplinary collaboration. (Which is probably where the literaturing composition comes in.) The value of our field’s work being known requires awareness across the disciplines.

English profs intellectual life has become isolated from the public.
How do we determine a scholar’s relevance?
–a negative reputation becomes entrenched
–readership for scholarship is usually limited
During one of the presentations this panel discussed the difference between reading and use. Scholarship is not being read, but only used. I think I agree with that differentiation. 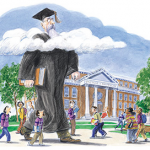 Here they made a reference to the university as popular culture such as discussed in Gerald Graff’s article from 2003. The art is from that article. It was created by Victor Juhasz.)

Simply “going public” (the present catchphrase and expectation) will not help repair the perception of our discipline. Simply writing in a more accessible manner or even with other people (as in service learning projects) does not show our relevance to the university in particular or the world in general.

I think some people would still publish. In fact I think inertia might keep people publishing long past a t&p rationale, if it were eliminated from that. I know I see publications as a way of keeping score. How am I doing? I have a 40% acceptance rate. Or I have twenty publications. But I agree that a lot of people would quit publishing and a large number of even the paper journals (which still have more cachet than the e-journals) would disappear.

Robert Scholes, imagination and narrative writing, composing literature.
So we should move towards literature-ing composition.

Theoretical and pedagogical work would be more accessible.
It would be good to increase the visibility of composition theory and literacy practices.
Living through literature.
“transactional reading of the text” 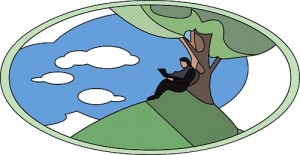 Roland Barr “Reading happens when the reader looks up from the text.”

There is anxiety over disciplinary content, says David Downing.

exceed the demands of genre

Orpheus and Eurydice as metaphor.
Orpheus lost Eurydice because even his charm and rhetoric did not allow him a second chance. He was depending on his own voice, his own eyes, to know if she was there. He could have called to her and listened for her answer. He didn’t.
He never talks to Eurydice. Orpheus had a myopic conception of audience… limited to himself.
Eurydice, on the other hand, always spoke directly and intimately to her husband. You would expect her to speak here, if he had only bothered to talk to her. 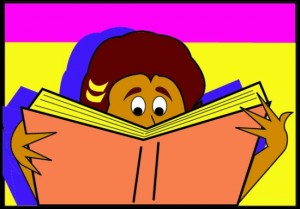 A literature text offers readers the opportunity to engage with it outside the close reading experience.

This relates very specifically to Gregory Jusdanis’ work as presented in the Why Literature Matters panel.

I referenced this discussion two or three times in talking with scholars about their presentations. It seems that this is a very timely text. The topic seemed to come up again and again or be touched on or referenced many times at the MLA this time.

Mark Roche also spoke about the use of literature or text versus enjoyment. Again that seems to be a theme or at least a significant discussion going on.