Do we really need more/new graduate students in English? I asked myself that question after reading Minding the Campus’ A Terrible Time for New PhDs.

This year’s MLA convention, after a 50 percent drop in the number of tenure-track job openings between the 2007-2008 and 2009-2010 academic years, was just plain grim, from all reports.

For months now, the spotlight of negative attention in the academic trade press has been trained on the for-profit “career colleges,” with their high dropout rates, sometimes questionable recruiting tactics, and poor reputation for “gainful employment” on the part of their graduates, who can find themselves with no jobs and mountains of debt from the student loans that account for nearly 90 percent of their alma maters’ revenues. Ph.D. programs, especially in the humanities, can be viewed as career colleges for the highly educated. As with career colleges, their stated purpose is vocational training: for that full-time faculty position in academia. 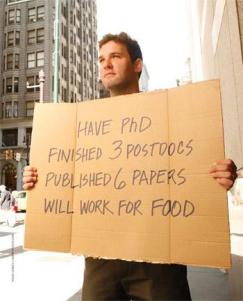 I’m wondering if we are really doing our students a favor when we encourage them to go into graduate school in English.

I was at a conference last year and someone asked me whether they should go to grad school in English. I said no. The other professor with us jumped all over me. But really? There are 200 people applying for a low-paying community college, teaching heavy, no research position every single time one opens up. Do we really need more grad students to up that number?

Despite the fact that I love what I do and I know others might too, I am starting to think that we would be more responsible if we pointed out that they can drive a truck and make the same amount of money that a full-time professor in our field makes.

This post quotes a discussion of MLA’s midyear report explaining what PhD graduates do. I know that if I show it to graduate students, most of them will cling to the “49.4% found tenure-track jobs” without even realizing that is less than 1 out of every 2 PhDs, without understanding that some of those tt jobs kick the scholars out after three years (R1s according to the CHE fora, unless the scholars are in the top .001%). That some of those tt jobs are in places the students have never heard of and had no desire to go to.

Update: Faulty Towers: The Crisis in Higher Education has an in-depth discussion on this topic which starts with:

A few years ago, when I was still teaching at Yale, I was approached by a student who was interested in going to graduate school. She had her eye on Columbia; did I know someone there she could talk with? I did, an old professor of mine. But when I wrote to arrange the introduction, he refused to even meet with her. â€œI wonâ€™t talk to students about graduate school anymore,â€ he explained. â€œGoing to grad schoolâ€™s a suicide mission.â€

I wouldn’t go that far, but it is much more difficult to get a job in academia than it was twenty years ago, when you could just walk in (like Robert Ford, my chair at the CC) or call (like I did) and get a full-time, tenure-track position. We at least need to prepare our students for the realities of the situation today.