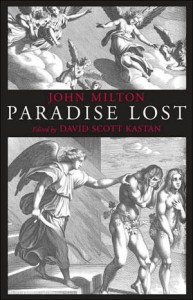 “Paradise Lost also put forth the Judeo-Christian worldview in which women are inferior to men.”
only two women in the story = “vain and seductive sinners”

Minaz Jooma in the article â€œThe Alimentary Structures of Incest in Paradise Lost,â€ says the attraction is “not who Sin is, but what she represents to Satan.”

Adamâ€™s attraction to Eve = incestuous, narcissistic
The angel reminds Adam that it his duty to remember Eve is not Adamâ€™s equal (Milton 1971).

“dart can be seen as phallic symbolism (1866).”
foreshadows:
Eveâ€™s punishment after the Fall
suppression of women -> control of their bodies

After the birth of Death, Sin becomes ugly (Milton 1863). Is it a transformation by the birth process?

“Milton uses the word â€œfoulâ€ to describe Sinâ€™s transformation from the waist down” ascribing to Sin the fault of Death’s rape of her
Milton sees/describes it as an infidelity to Satan.

So Sin is being blamed for the rape of her by her son as an act of infidelity? This is a cultural point I could point out or write on if I am going to keep writing on rape.
Same thing happening in strict Islamic cultures now.

Adam being attracted to Eveâ€¦ 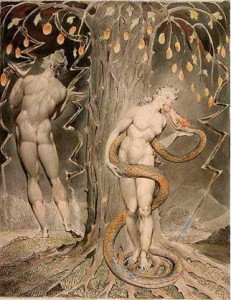 Milton departs “from traditional Church rhetoric,” identifying both Adam and Eve as guilty of the Fall.

before Fall, Eve submitted physically, emotions rebellious
wanted “autonomy and independence”
Later Eve submits to Adam out of love and fear (of losing him)

Audience response:
Adam takes 12 lines to decide to eat the fruit.
He doesnâ€™t even hesitate.
So much of Adam is what he says to himself.
He really loves her.
When she falls at his feet, he touches her. Every time they are connected mentally/emotionally/spiritually, they are connected through touching.

Angels are arguing that Adam needs to treat Eve differently, not as an equal.

Adam sees something in Eve and doesnâ€™t want to lose her. He cannot imagine his life without her.

Adam has already submitted to Eve before she submits to him.

Both of them make mistakes. Both are held responsible.

Parallel to Sin and Sin as a victim. Sin is a victim and is not an active agent who is responsible. She is frequently punished for behavior that was not hers. She was sent to guard the gates becauseâ€¦

Sin as female is clearly anti-feminine.

Adam and Eve, the way they address themselves, changes. They start with loving titles and then after the fall they call each other Adam and Eve only.