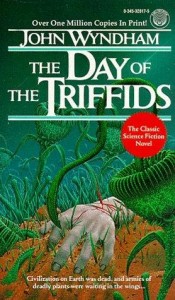 John Wyndham The Day of the Triffids (movie is a joke. Book is good.)
author of the book The Village of the Damned
Go-Go Girls of the Apocalypse next class period

There are several ways to group novels and for the sake of this paper/presentation, Kuhne looked at the novel’s presentation of order and community following the chaos of the apocalypse, whatever that was for the society of the novel.

Stories of post-apocalyptic literature:
Folks need to impose some sort of order on the chaos that inevitably accompanies the wide-spread destruction of populations. 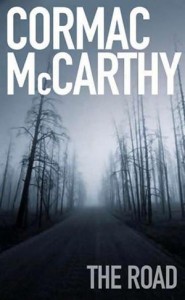 Picture societies that devolve into tribal, clan, or family units:
Jack London in his novella The Scarlet Plague (1912),
George R. Stewart in Earth Abides (1949),
Jean Hegland in Into the Forest (1996),
Cormac McCarthy in The Road (2006)

Other works look at it differently.

Envision end of the world scenarios in which communities adopt some type of more highly refined and organized legal code to combat the â€œlaw of the jungleâ€:
Pat Frank in Alas, Babylon (1959),
Ardath Mayhar in The World Ends in Hickory Hollow (1985),
James Howard Kunstler in World Made by Hand (2008), and
William R. Forstchen in One Second After (2009)

The Scarlet Plague (1912): English professor
Plague happened in 2012.
(Oops. Be careful if you have a lot of piercings.) Granser thinks that the boys are â€œtrue savages. [. . .] In another generation [they] will be perforating [their] noses and ears [. . .] The human race is doomed to sink back farther and farther into the primitive night ere again it begins its bloody climb upward to civilizationâ€ (21).
2072, tribes

After the plague, her former chauffer, Bill, owns the wife of his former employer.
the end of the world ironically brings social justice when brute force nullifies all class distinctions, oppressed become oppressors

Donâ€™t agree with this. There is no social justice that takes those who are employers as slaves later. The employee is not a slave. Not used sexually. Not expendable. Yes, their livelihood may be in jeopardy, but not their lives nor their personal freedom. 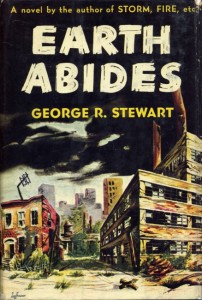 George R. Stewartâ€™s classic Earth Abides
law is clearly more structured than in Londonâ€™s Scarlet Plague.
Here, there is a process.
Charlie has been warned to stay away from Evie.
There is agreement by the elders (not all of whom are male) about what action to take, and here, the community leaders share responsibility for their actions.
‘Ironically, hanging Charlie doesnâ€™t prevent an epidemic from sweeping through the tribe, and Ish considers a new way to deal with strangers: the â€œtwo-hundred yards law, that was the idea, and then look at them over the sights of a good rifeâ€ (273).’ 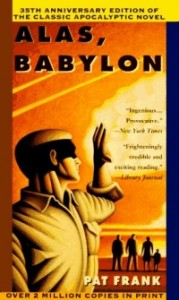 “â€¦ In fact, under Randyâ€™s leadership, the community of Fort Repose is doing so well that no one accepts â€œrescueâ€ when it finally arrives.”

Ardath Mayharâ€™s The World Ends in Hickory Hollow
Community conquers the obstacles of a nonindustralzed, post war world.
The community must also face down would be authorities who cling to the past. 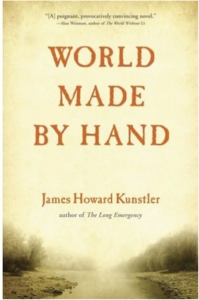 “collapse of society â€¦ a gradual thing, sparked by terrorist nuclear attacks â€¦ and a flu epidemic that kills three quarters of the population.”

However, Kunstlerâ€™s novel is just as much about law and order as it is about surviving after the lights go out.

Robert Earle, the protagonist and narrator of the novel, notes that â€œWe all knew the apparatus of justice had dissolvedâ€ (57).
After the murder of one of their own, the people of Union Grove must establish a legal authority to deal with the crime.

provided his people with a sense of security and purpose

scenes in Albany indicate that law and order heart of rebuilding after social collapse. â€¦ â€œNew York City is finished. [. . . ] They canâ€™t keep order there, and you canâ€™t have business without orderâ€ (142).”

Union Grove reinstitutes a system of law, but only after the outsiders, the â€œNew Faithers,â€ come

William R. Forstchen One Second After 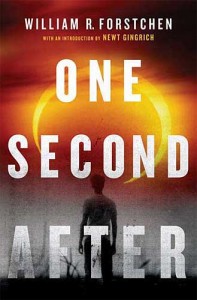 the most developed and organized community response

The result is starvation, lack of medical care, and general lawlessness. Establish martial law in Black Mountain. Then cannibal gangsters called the Posse threatens the town.

A year after, the army arrives. Higher survival rate in Black Mountain. 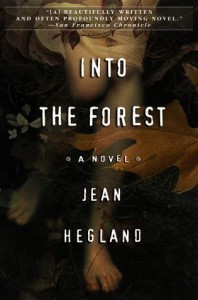 Heglandâ€™s Into the Forest is perhaps the most unusual.

A family affair in which self defense is the code. After rape, sisters burn down their house and retreat into the forest, taking only a few books, seeds, and their fatherâ€™s rifle,

Into the Forest, like Cormac McCarthyâ€™s The Road, has no law other than the law of survival; if there is any symbol for law in the novel, it is the pistol that the man carries with him at all times.

There is no community, no remaining fragments of a legal system, no law in novels such as:
David Brinâ€™s The Postman (1985),
Luciferâ€™s Hammer (1977) by Larry Niven and Jerry Pournelle,
Patriots (1990) by John Wesley Rawles, and
The Stand (1978) by Stephen King,

“The essential measure of culture and civilization resides in the type of law and legal code that the survivors embrace.”

“The novels are concerned with larger issues related to law and order, to the nature and evolution of culture, and to the relationship between societies and individuals.”

PD James The Children of Men

Were you able to sort by the fears? They type into the societal fears. Tapping into popular culture of fear at the time.

Jack Londonâ€™s story was out of print until swine flu came in. Some really sloppy prints. Londonâ€™s vision of 2012 America is interesting. Magnates control the politics.

Explosion of these novels because of the economic crisis, most recently. Many were from the Cold War.

So many characters named Eve. Not the most artful allegory.