The Impact of Chivalry in Sir Gawain and the Green Knight and Morte D’Arthur Victoria Leland, San Antonio College (undergrad)
Carol A. Bernard (so who is this?)

effect of chivalry can be seen in Arthurian legends

MDâ€™A focuses on Sir Lancelot. Opens in two knights plotting to reveal.
SL saves Guinevere from death, but kills two of his allies.
All but 4 of Knights of King Arthur are dead.

Chivalry introductionâ€¦. very basic, but interesting.
Would be a great presentation at a research fair, but Iâ€™m not sure how it works here. What are we talking about?

Reads well. Does a good job. Uses the mic. Knows how to pronounce her words. Has a good cadence. Doesnâ€™t hurry, and thus hurt understanding. 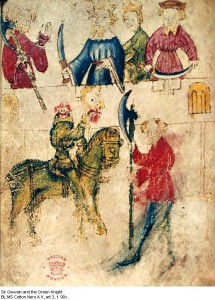 Knights must be loyal and courageous.
Must show respect to adversary.
Otherwise chivalry is weak and meaningless.

Both SG and SL are courageous.
Both make mistakes, by neglecting the code of chivalry.

SG confesses to greed and discourtesy.
everyone agreed to wear the green belts after SGâ€™s return.
The source of SGâ€™s fall, it becomes a sign/banner of chivalry.

Does not become haughty when presented with his vices.

Exposes a deep crack in his character.
MDA SG does not agree to join other knights. He wonâ€™t join them. When his brothers are killed, he goes â€œcrazyâ€ for revenge.
Loyalty to the court is replaced by his personal love for his family. Quest for vengeance becomes the driving force behind his character. No longer concerned with the kingdom, but only with himself and wanting SL to pay for his brothersâ€™ death. Danger results in the ruin of Camelot.

SL is the golden boy, poster child of chivalric ideals.

At Lancelotâ€™s death his praises are presented by his brother â€œnever matched, â€¦ most courteousâ€¦ truest friendâ€¦ truest loverâ€
No knight could ever match his ability.

his actions in love are still chivalrous, even though his cuckolding of his friend is not chivalric behavior 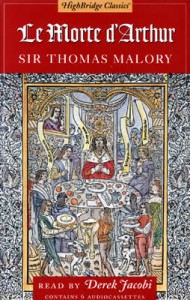 Main duty of knight is to protect the royal family.
He must guard her station, even against the kind.
Keeps his word to come to her rescue.
Lot of gray area, SL picks the lesser of two evils.

Killed Sir Gaheris and Sir Gaâ€¦, Gawainâ€™s brothers.
They were not enemies. They were friends and allies of SL.
As a result, SG encourages Arthur to go to war against SL.

dark side of SL
â€œthe best knight in the world and Malloryâ€™s paragon of chivalryâ€ â€¦ double adversariesâ€¦ violent urges generally repressed by the chivalric code
quote from an article, canâ€™t remember who wrote it

attacking an unarmed opponent is against chivalric code
SL breaks the code, kills his allies, and sparks the destruction of Camelot.

SG wants revenge and this leads to the destruction of Camelot.

Arthurian legends, many of social issues are relatable or admonish us to take heed of their mistakes. Paragon for chivalry = the court, Arthur

When one or more of the individuals place themselves above society, the society is damaged and ultimately destroyed.