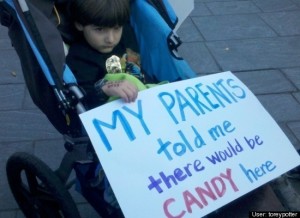 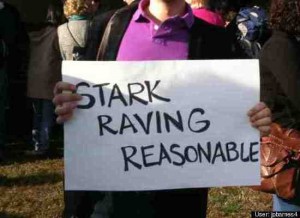 This rally was held at end of October 2010. Stewart is not an overt political activist? Instead, in his rhetoric and its representations of it at the rally, Stewart speaks as trickster.

Anderson uses Just Gaming as a theory base.

The media response was interesting and so was Stewartâ€™s response to the media.

Stewart is a key figure in (political) popular American culture.

2 modes through use of language:
rally attendees signs (collected by The Huffington Post)
Stewartâ€™s speech

Stewart has been getting into â€œmore serious reporting,â€ such as in October 2004 when he accused Fox of â€œhackery.â€

He is all about the debate and has a willingness to engage his guests in current issues. 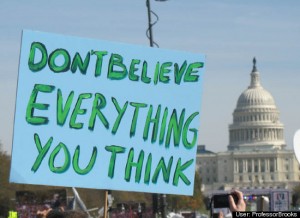 Since 2001 Colbert and Stewart promoted Rally to Restore Sanity and/or Fear. Original responses to the announcement of the rally were positive. WSJ quickly said it was a response to Beckâ€™s rally, which is clearly an example of tricksterism.

Loki promised ridiculous payment for Asgard on a crazy schedule. Problem is that the giant was able to finish, with help of his horse.
Loki turned himself into a mare and lured the stallion away. Loki then gave birth to an eight-legged horse.

Anderson could not explore the whole ideology of tricksterism, because that would take too much time, since it is a huge area. 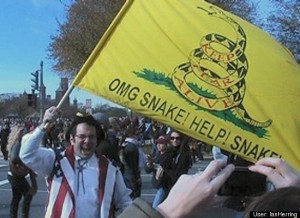 2 major concepts:
ruse = retell story, refocus the narrative to enable the audience to see another angle
game of the just = (reading assignment on topic)

Justice = reevaluation of moves in a game

â€œAbsolute injustice would occur if the pragmantics of obligation, that is the possibility of continuing to play the game of the just, were excluded. That was unjust.â€ (Lyotard and Thebaud, Just Gaming 67)

Stewart is a self-aware trickster. Most clearly expresses this Nov. 19, 2010 during an interview with Rachel Maddow. Several times referenced ideas of â€œgaming.â€ â€œPolitics is a Democrat and Republican game.â€
He said there is a bigger difference btw folks with kids and without kids (parents/nonparents) than between Dems and Repubs. (Maybe he’s right, too.) By doing this, the trickster Stewart introduces new angle into the game.

He does acknowledge power of politics. Then he delves into the issue of his rally as a political statement.

Does Daily Show function only as entertainment?
He was asked this question in the interview.

His answer included:
â€œform of me aroundâ€ â€œa comedianâ€¦ who criticizes [politics]â€
â€œ[I have] No ability to really do anythingâ€
â€œThe rally was to deflate the bubbleâ€¦ articulate an intangible feelingâ€¦ say itâ€™s a real feelingâ€¦ idealistic but itâ€™s impotentâ€¦â€
â€œserve the best purpose that I canâ€ in being sardonic 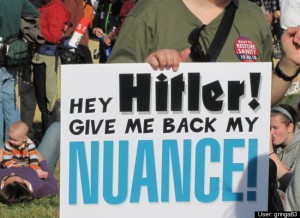 The interchange indicates Stewartâ€™s understanding as his role as trickster. Maddow appears to be pressuring him into a role. Stewart has the feeling (Anderson thinks) that politics is more than a left-right side and that his job as trickster is to create a place btw political streams that is as wide as possible.

Some who attended or participated did not like (in the rally):
lack of directed action
rallyâ€™s message unclear? 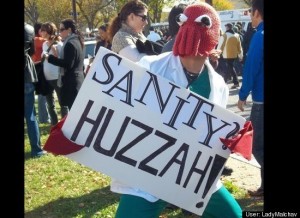 Fun stuff:
rhetoric of the signs at the rally
then photographed at the rally
posted on fb and The Huffington Post

Some of the signs:
Somewhat Irritated about Extreme Outrage
What do we want? Respectful Discourse. When do we want it? Now would be agreeable to me, but I am interested in your opinion.
Hey Hitler. Give me back my nuance.
One of us or perhaps both of us may be correct
Real patriots can handle a difference in opinion

pi is all the irrationality I need
People who use hyperbole should be shot
God hates signs.
This is a sign.
The people behind me canâ€™t see.
End Road Work.
Only the jesters dare speak the truth. 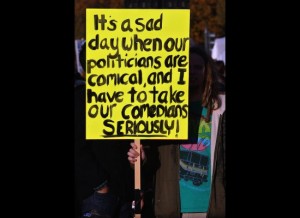 All of what Stewart does shows the nature of his role of trickster, by keeping the game going. (What game? I am just a bit confused.) The tricksterism lets them–Stewart and Colbert– play the game of the just.

Stewart recognizes, accepts, and embraces his role as Loki-like trickster.

Questions:
How did you get interested in Stewart?
spend lot of time working with Loki, saw Maddow interview, most self-aware expression of tricksterism that Iâ€™ve ever heardâ€¦ got the transcriptâ€¦ analyzed how he was constructing himself in that way.

Is Glenn Beck a trickster? Beck versus Stewart
Is his rally a space to be a game player?
Relatively self-aware. Created persona.
find him amusing when I watch him as a performance

lacks the sense of irony that Stewart does
Stewart intends his audience to read him as ironic.
Beck has less nuance.

Where Stewart was talking to Maddow and calling her out as partisan. Showcasing the places where he thinks the left closes down the debate. He would do either, but the right tends to give him more material. (Bias is clear. There is plenty to whatever.)
Stewart has not spared Obama in the last year. Extremely cynical to Libya. Does not lampoon them quite as effectively.

Doesnâ€™t go out of his way to be balanced. Takes his material where he finds it.

Beck doesnâ€™t want anyone on the field. Stewart is worried about the stadium. Feel as if Beck is generated by an outside force. Stewart is more authentic.

Stewart has managed to outlast most other figures.

Stewart is now doing Beck imitations. Stewart is all the sudden keeping the presence of Glenn Beck around by doing those imitations. 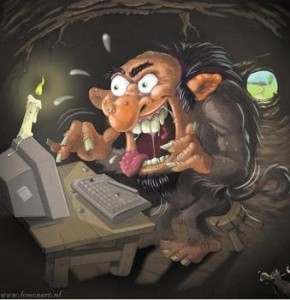 refocusing technique to move around power

notion of the troll
troll v. trickster
troll lacks nuance and just wants to irritate
famous personalities that you would now consider trolls
Is the troll an aspect of the trickster?

Other people did not show up:
NASA and New Media: A Study of NASAâ€™s Emergence into Socializing Networks, YouTube, and Apps
Maria Baugh-Horstman, University of Houston – Clear Lake