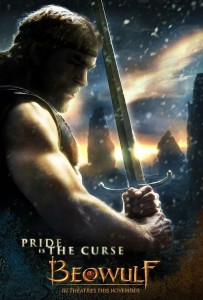 Siegfried the Volk-Song: Examining the Interpretations of Siegfried the Dragon- Slayer and the Making of a National History
Peter H. Johnsson, San Francisco State Univ.

Siegfried the Volk-Song: Examining the Interpretations of Siegfried the Dragon-Slayer and the Making of a National History
Peter H. Johnsson, San Francisco State Univ., beginning at the University of Toronto in the fall
recent MA grad 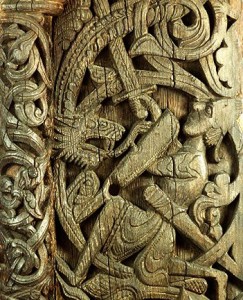 Slightly hyperbolic title doesn’t match the truncated version of the paper.
Examining various incarnations of the myth of Siegfried the Dragon-Slayer. Names vary, but I will stick with one. Two medieval verisions, Wagner’s opera, 21st C version.

Repeatedly becomes a platform to use the authority of the story… not from a desire to be true to original story.
What is it about the myth that makes it so available for appropriation?

Siegfried slays the dragon Fafnir and receives the dragon’s treasure (and some supernatural power). Becomes entangled with a Valkyrie named Brunhilde. Also involved with the Burgundian family. The Burgundians kill Siegfried. Then they are turned by Attila the Hun.

Often perceived as having relevance to actual events in 6th C. No early versions are available. Viking runestones mention it (Western Sweden has oldest rune stone.) 13th C is when versions appear. Most influential came from Iceland and near Vienna.

Germanic:
Epic poem where Siegfried is a negative character. Supposed to be a chivalric knight, but has no limits to what he will do for his lord.
Siegfried courts the bride for his lord and then consummates the marriage when his lord cannot.
Hero’s downfall is linked to him having chosen to be a chivalric knight. (Commentary on the changing culture.) 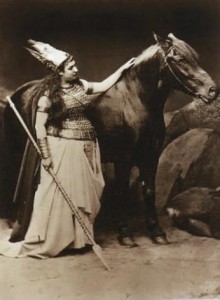 Wagner:
becomes a noble savage
ruled by emotions, has no social knowledge
though grown up, referred to as a child and a boy, child-like innocent
The story becomes more fantastical without the moral message(s) of earlier works.

Shaw saw Wagner’s work, esp. Siegfried, as a warning against the industrialization and capitalization of society. Siegfried can be explained within this as a product of his extreme innocent nature. In this way he is associated with early Germanic peoples (and their popularity).

After WWII plummeted in popularity.

2004 saw the first title since 1929… Dark Kingdom: The Dragon King hit theaters in 2006. Lots of leather and chain mail with strong elements of Norse paganism. Gives the illusion of being closer to the sixth century than the medieval texts. 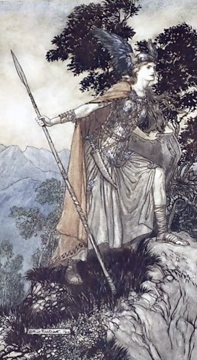 Moral message of the story is really about barbaric culture (Brunhilde) and the dilettante Christian culture (Burgundian princess). Brunhilde becomes the champion of the pagan ways (honor above all) and tries to rescue Siegfried from the love triangle. Brunhilde gives him a Viking warrior burial, with an Icelandic poem. Strong anti-Christian message.

But the gods are replaced by explainable phenomena.
Siegfried claims he doesn’t believe in gods or kings (“takes more than a crown to make a man a king”).
Adds a veil of pseudo-history.
The opening of the museum in 2001 shows myth from fact… Associations of the city with the story helps make the “real historical artifacts” part of the story.

Blurring of wall between myth and history is not new. Direct re-incarnation of 18th and 19th C ideals. 21st C version builds on earlier distortions of late versions.

“Theme is timeless and universal” (movie director)…
Platform for social commentary as idyllic past to influence direction of the future. 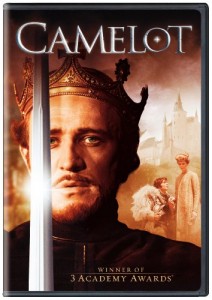 “Jerry Zucker’s movie is a travesty of Arthurian legend, but so is every Camelot movie.” Anthony Lane

Film reviews of Arthurian feature-length films.
Why film reviews?
Act as metatext for the film. Often first contact for the public with the film. Show how the film may be perceived. 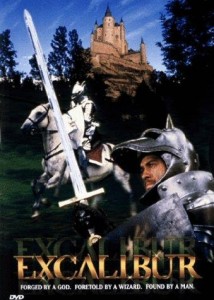 From 1967-present day there have been 92 films based on the following criteria: only those set in medieval times, only American films (released or aired), not animated, no time travel, had to be presented as Arthurian story.
That left 14 films.

Explanatory comments:
Found that all the reviews repeatedly talked about six categories. 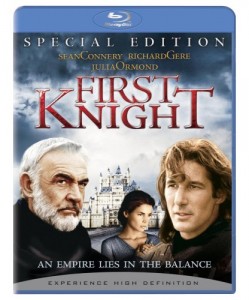 Primary sources:
That is, the sources from which the movie’s events were said to have come.
Critics always criticized the film in this, even when they weren’t acquainted with the source. Sometimes the critics indicated their lack of familiarity.
Even without familiarity, the critics still criticized the film for not being faithful AND provided explanations for why the film might not have been faithful.
1. so many versions of the story
2. not enough info about time period
3. just a legend anyway
4. director’s obligation to add own interpretation

story lines: Holy Grail, Christianity, must have magic, chivalry, love triangle (must have chemistry and must consummate the love), Camelot at its height/finest,

iconic images: must see sword pulled from stone, must have knights at the round table
point of view: flexible–did not have to follow one character per se
focus of story: flexible, though usually think of Arthur as main focal point

Character Portrayals:
The critics gave reasons why they reacted favorably or not to actor’s interpretations.
King Arthur–idealistic, peace keeper, grand dreamer of equality, noble, majestic, good humored, fair, likable, commanding figure, good general– should be extraordinary
want to see him transition from boyhood to manhood
Guinevere–cipher (used the term consistently), looks pretty but does little, want her to be more than beautiful, mercurial, moody, noble, enchanting, vulnerable, bitchy –They want her to be inconsistent.
Lancelot–heroic, athletic, virtuous, French (or at least speak with a British accent), noble

The most interestingly was critics’ feelings about the Knights of the Round Table– want the knights fleshed out, deep character portrayals, doesn’t seem to matter how faithful the portrayal is–just want a “real” character.

Time period:
accuracy?
scenery, costumes, dialogue, battles
locations were pretty–scenery
costumes less a consensus- Reflect a specific time period or be ambiguous? But should feel authentic.
battles– epic, bloody, understandable (bar raised after Braveheart and Lord of the Rings), battles considered boring and bloodless, lack of blood in the battles– thought it would help them understand if there was blood
dialogue–not contemporary, should evoke feeling of medieval, but not cliched or anachronistic

Conclusion:
film reviews across time
How people view Arthurian legends…
Consistent aspects that are intrinsic. Relevance of films to the modern era.

Recommendations for Further Research:
go back to Knights of the Round Table (1957)
do the time travel films (not just Connecticut Yankee)
do same on animated
do same on Tristan and Isolde
Interesting to original release reviews and retrospective reviews.
This was especially clear with Monty Python’s Holy Grail and Excalibur. Monty Python movie a cult classic and Excalibur was not well received at time, but comparatively is seen as a great film.