I’m Not Dead Yet: OE Elegies

Focus on The Wanderer. Can be applied to all OE elegies.

emotional effects of sublime: fear, grief, curiosity, wonder, joy
pain is the most powerful human emotion (said Burke)
anything that works with terror or pain is sublime.
Pain raises us beyond human kind.

Believe the journey to the transition is as important as the change.
Inwards, outwards, upwards.
Sublimity of poem’s setting.
Meditative atmosphere that compels human mind:
sea 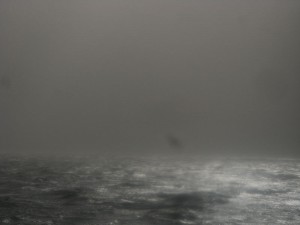 sublime elements:
sea itself (things of great dimensions) Burke and Kant both identify sea
time of year (winter) and nature of sea, vastness and infinity
–tendency to fill mind with horror
–eye not being to see bounds, becomes emotionally infinite
time of day and solitude â€“ solitary, travels path of exile, deprived of native land
–Burke classifies solitude and silence as depravations to humanity (absolute, not temporary)
–entire life of solitude is terror-developing 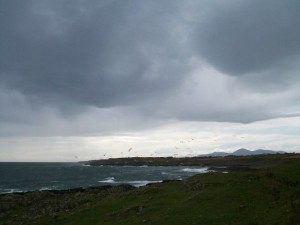 Burke explains that such sounds are capable of conveying great ideas.

Depth of speaker’s despair in line 8.
morning = before dawn, combined with wonder and despair
waking dreams?

defines himself as a solitary earth-walker

begins as a self-pitying, self-focused character

Burke says loss focuses mind.
exterior forces breaks the wanderer away (gulls and their cries)
authenticity of his melancholyâ€”almost with surprise notes

realizes nothing in this world will end despair

Burke says meditating on fall of great people and cultures, can create a delight blended with uneasiness.
transience is “delightful melancholy

human death is part of the creator’s plan.
This is another turning point.
Emphasized by speaker’s pause.
Passionately laments the loss of his companions, because he finally realizes his grief kept him from consolation.
All things on earth end, even suffering. 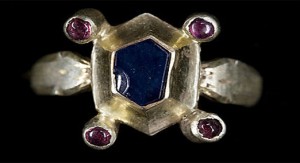 a portion of her dissertation (on almsgiving)
bypassing scholarship

scope of criticism is extensive, yet one aspect shared by these two is not explored. Worldly wealth as given by lords (gift-giving) and the need to turn attention to heavenly treasure.

negative exemplum against secular exchange of gifts
alms and giving to church is not mentioned at all
absence of almsgiving is central to the poem (REALLY? something not there is the main point?) 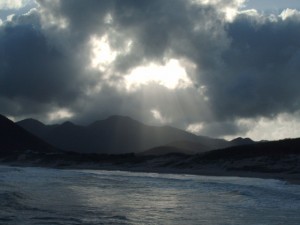 Exeter Book argues about generosity.
How does The Wanderer match that?

Kept by lord for own personal reasons.
Nothing spoken of in terms of almsgiving (Guthlac, the Phoenix).
lord gift’s to retainers is transitory

penitential? No mention of repentance anywhere.
But it is ascetic and reminiscent of the desert fathers of the early church.

quotes about sorrowful life and traveling from place to place
loss of lord who is a dispenser of treasure
severity of loss “all joy has died” is based on not getting any gifts
seems an exaggeration of his emotions, when he says he has lost everything
excess emotion, overemphasis on overdependence on earthly gifts

l. 88a presumably the voice of the wanderer
Questions. l. 92
Where have the horse and the youth (young warrior) gone? Third is the giver of treasure.

The Seafarer
speaker often characterized as a monk
more explicit in lordâ€™s gift-giving, does not help one reach eternal life

on gaining fame on earth and in heaven for giving the church gifts
l. 12b-16

l. 35bff “tossing of the salt-seas I seek for myself” through 47
earthly success may cause a man to forget his purpose, man at sea is in no such danger

quote 7 is all about how trust in worldly things does not work. Not an aspect of someone on a journey to God.

“days are departing, / all pomps of earth’s kingdom”
there are not now kings nor caesars
nor gold-givers such as there once wereâ€

focuses on end of most powerful men on earth

implicit example on how not to give

l. 85 begins with behavior that are not appropriate
83b-98b

l. 123 God is thanked for honoring humans with future faith.

mss context
The Wanderer not “marred” with Christian work. Stresses that nobles should give appropriately in order to reach heaven.

Richard Gancy
“It Has its Ghostliness: A Heroic Challenge in Wulf and Eadwacer Translation”

1. plot and theme
2. who? character
3. interpretation

Poem does not answer those three questions.
Poem becomes a labor of individual championship.
Body of criticism allows students to come up with new uses of poems.
updated interpretations

critical history, challenge by the female speaker which expresses her place

George K. Anderson = woman as captive in a foreign land

sexual tension in the poem
domestic triangle
more than mere suggestion of physical passion
drama makes three: woman, Wulf (lover), and Eadwacer (husband)
love triangle view is the prevailing view, most functional view
But what the characters are doing is confusing?

l. 16 is she addressing her husband?

A-S tradition of avoiding sex.
So it is subversive.

she is beset with anguish, grieving for a missing man.

l. 9-15 anguish with which woman speaks is â€œunparalleledâ€ in OE works

The Wife’s Lament and/v. Wulf and Eadwacer in class?

Walter Nash– it has its ghostliness. It figures like a wraith out of another time.

first look at anguish = fear for safety of Wulf This seems to be related to sublime that first speaker spoke of.

Wulf is on an island. I am on another.
refers to death of lover
has a refrain (only other one is in Deor, immediately before Wulf and Eadwacer)

second look at anguish is expectation
looking at past experiences
when his return was impeded, rain shows up (sky weeps while lady wails), she is sorrowful

woman has sexual experience with the one brave in battle
Peter S. Baker says it was joy and loathsome
physical pleasure and concurrent misery of absence of Wulf

anguish of lament
sets the woman within A-S experience

She is isolated on an island opposite Wulf. Addresses the property guardian.

Question: Is it possible that Wulf was her husband and her adulterous affair with the brave battle guy is why she is on the island? Can she be talking to the â€œproperty guardianâ€ who watches her?

Jane Chance, if a woman does not make peace, she must make war
pejorative cast to this behavior
women are considered unchaste, with devil, described as a ruler
Grendel’s mother, inversion of peace weaver
The lady fits such an inversion perfectly.
Wulf = outlaw? (Name?)

Answer:
first half of line is the companionship
second half is position

One of the sources discusses the property watcher as a prison guard.
Rape?

Riddle? Is this poem a riddle?

Question:
reading of something as her anger, how frequently that one shows up
in the Battle of Maldon also shows up
the challenge in line 16 (Do you hear me?)

Have you looked at this word elsewhere?

Question:
various levels that the sublime works in the poem
driven by the narrator or nature?

Answer:
One speaker.
Sublime works on two levels: one on the narrator and one in the poem itself. What type of sublime was happening between the scop and the audience itself? There was supposed to be an emotional reaction.

poetry combined with music or chant, was supposed to raise audience to the sublime

Guthlac A repeats alms all the time

Question:
How do you know the audience at the time would read it as teaching?

Answer:
homilies, lots of homilies
whole section on what defines alms
Exeter Book was referred to as discussing alms.

Always in the hands of monks.
Monks used it as a teaching tool.

Question:
Who is the audience?

Guthlac A = sections where he specifically says, itâ€™s important to listen to the people educating you.
whole section with œmonks gone wild, monks behaving badly. The devils are trying to tempt Guthlac. They are young. They will grow wise and will learn how to treat alms correctly.
Seems to speak to nobles and to monks both.

Question:
What about sexual riddles?

Answer:
Maybe a way to draw people in.