OE maxims tell us that “It would be better for him to have a brother, for them both to be the sons of one man… if they were to attack a boar or overcome a bear.”
But the passage is not really about brotherhood. It’s more about the need for companionship, a common theme in poetry.

Kinship is very important historically and culturally. We have examined it through extensive scholarships.

When we have focused on relationships, we have mostly focused on father-son and nephew-uncle.

One of the relationships we have focused less on is two biological brothers.
Looking at it specifically through Beowulf. 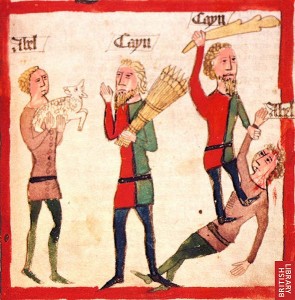 Many references in Beowulf:
Cain and Abel
Hrothgar and his brothers
sons of Ingenfeld
Unferth’s less than ideal relationship with his brothers
(and many others that I didn’t get)

Brotherhood on the margins. Mentions but doesn’t emphasize.

When Hrothgar pauses to tell of his older brother, Herorogar (465-69).
“Heorogar was dead by then, my older kinsman no longer living, a son of Healfdene; he was a better man than I.”
Some argue that Hrothgar is presenting a modesty topos, but is absent in OE work in general.
Hrothgar has given more information than necessary, tangential, or is less info than nec because leaves out points.

“conversational maxims” (from Paul Grice)
Speaker will normally make contribution to conversation, no more and no less.

What is Hrothgar not saying?
How did Heorogar die? How did the transition of power occur? How was Heorogar better? Where does the third brother fit? Where does Beowulf’s father fit? Would Heorogar have been able to deal with Grendel without outside help?
Poet places Hrothgar’s relationship with his brothers at the edges of the conversation that follows. 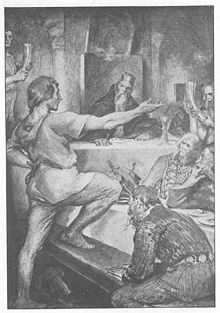 Details of Unferth’s slaying of his brothers is missing.
“mysterious shame” is alluded to, not described
First of references to Unferth’s misdeeds is from Beowulf when he responds to Unferth’s challenge.
Second reference is the narrator (1165b-8a) speaking.
“Each of them trusted in Unferth’s spirit, that he had a great heart, though he was not honorable/merciful to his kinsmen in the swordplay.”
ambiguity is caused by the poem avoiding the details of brotherly relationship.
Both Beowulf and narrator point to importance, but don’t explain importance.

Ominous discussion of Hrothgar’s sons:
Hrothgar’s sons are in the room but unspeaking and unspoken to.
l. 1190b-91
“There the good one sat, Beowulf of the Geats, between the two brothers.”

Caution is needed when arguing about an absence. “What is known by all is explained by none.” It could be that the information was common knowledge.

Hygelac’s two brother. Killing of older brother by younger brother.
l. 2435-43
“For the oldest a murder-bed was unfittingly spread by the deeds of a kinsman, when Haethcyn struck him, his lord, with an arrow… shot down his kinsman…”
This was accidental.
28-line explication follows.
But the lines are about a hanged man’s father watching the hanging. What is the point of that? The explicatory scene (however it is interpreted) is from the focus of the father. Explication is about father-son. Brotherhood is again left unexamined.

Question becomes one of ramification
draws on Rolf Bremmer “though one is always … the other is always troubled” and TA Shippey “advantages of others”
One of the implications is the aesthetic effect is projection of hesitation or suspicion of familial bonds.
Important to understanding the point of the brother-brother references. It is one of the significant points of the work, but “it just isn’t going to say it to yourself.”