I have been listening to A Whole New Mind. While I have only heard the theoretical chapters, for some reason, those have expanded in my head and I see all kinds of relevance and practical applications in my teaching and my own work.

One of the elements of the conceptual age is play.

I think that The Tempered Radical has a great idea for encouraging innovation and, in part, it involves play.

Christensen and company argue that the most innovative thinkers often force themselves to find metaphorical connections between their fields and seemingly unrelated objects.

We used to do this with our family while driving in the car. Fun times!

The authors of the book write:

“Start a collection of odd, interesting things (e.g., a slinky, model airplane, robot and so on) and put them in a curiosity box or bag…Then, you can pull out unique items randomly when confronted with a problem or opportunity…

When brainstorming for new ideas, odd, unusual things often trigger new associations. It may sound silly, but seemingly silly things can provoke the most random associations, literally forcing us out of our habitual thinking patterns.”

One of the teachers at my old college does this. She even gave me one of her curiousity box tokens. I don’t know if she used it quite like they suggest, but she would pull them out when she needed help thinking. 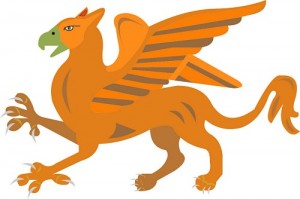 I think that this could be an interesting and engaging process. What if, for example, everyone had to pull three things out of their car or dorm room that were unique or odd? What would they bring? How would that relate to their writing assignments?

I am seriously considering engaging this aspect of the conceptual age in class. I think it might be a great way to jumpstart their thinking.

Tempered Radical also provides handouts! (Yay! I don’t have to make them up.)

A twenty-second exercise: How does a gryphon relate to teaching college English?
A mix of various parts. Often dismissed. Folkloric. Unsure of how to grow or feed it. Interesting mix makes for long-term captivation of thoughts and ideas. Design matters. All the disparate parts have to work together.

Update:
First, I explained the Conceptual Age idea, including a brief history of the Industrial Revolution and the Information Age. They were able to explain why we are seen as being in the information age.

Then we talked about what kind of jobs are being outsourced.

Then I presented the Conceptual Age elements of Daniel Pink (and Innovation, which I added because of Tempered Radical).

Finally, I took a box of clever toys (and not so clever ones) as well as a few simple things (pinecone, lock, empty glass Coke bottle, and a spatula) and passed one out to every student.

I did this twice. The first time, the students had three minutes to come up with some way in which their item was like a class they were in.

The second time they had to either say how the second item was like their major or their experience (in the last 2.5 weeks) of college life.

Got a great response on many things. The ones I remember:
pinwheel = exercise science, Need to keep moving. Need to work together.
ViewMaster = psychology, So many thoughts that I have to figure out how to see.
slappy hand = required intro to college class, which is not as the student expected
Silly String = scary but no reason, fun afterwards– about college experience