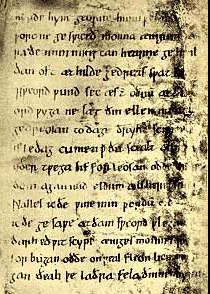 I was a rhetoric and composition major field person at Purdue University for my PhD. My second field, however, was Old English language and literature. I also studied OE works in translation in my master’s program. Until SCMLA on Friday, though, I had never heard of the Old English epic Waldere.

Jonathan Himes, one of the speakers in the Science Fiction and Fantasy section of SCMLA, wrote a critical edition of the poem from Cambridge Scholars Publishing. The Old English epic of Waldere is a sixty-one line fragment that mentions Attila the Hun and other migration-period legendary figures.

Right hand of Attila, let not your royal strength
droop now, nor your daring — now that the day has come
when, son of Aelfhere, you shall surely either
give over living or a long doom
have among after-men, one or other.

Never shall my tongue tell to your shame
that I saw my friend at the sword play
with a fainting valour falter before the attack
of any man whatever, or make for the baulk
to save his neck — though new foes came
and reaching blades rang on his breast.

No, you carried the fight so far into the open
that I dreaded your death. You drove on too boldly,
crowding the strike, with each step further
out of your ground. God is with you:
you may enrich your name with less reckless strokes.
(translation from the Penguin collection The Earliest English Poems)

The basic storyline and the history of the manuscript can be found at heorot.dk:

The handwriting of the fragments seems to date the MSS to roughly 1000; the language appears to be late West Saxon, though some forms appear to be late Northumbrian – the date of composition may have been early, in the 8th-c., or as late as the MS itself, late 10th-c. Based on the form of the continental Walter stories and the style of the two remaining OE fragments,Waldere in its complete form must have been a poem of impressive length, at least 1000 lines long, possibly as long as Beowulf.

Other information can be found at acravan.blogspot.com (which is where the two pictures come from):

Waldere is considered the only evidence that the Anglo-Saxon people had knowledge of the Walter of Aquitaine legend, which remained popular throughout the Middle Ages. 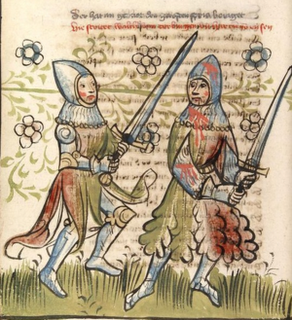