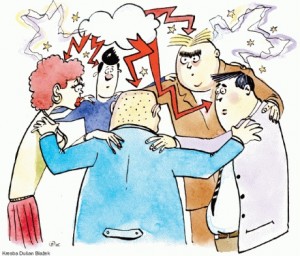 As the authors of Writing Analytically explain, “The person who is doing the interpreting too often stops with the first answer that springs to mind as he or she moves from observation to implication, usually landing upon a cliche. If this first response becomes the X, then he or she is prompted by the formula to come up with other, probably less commonplace interpretations as the Y.”*

As an example, they mention a Nike Freestyle tv ad that contains basketball players dribbling and passing and maneuvering to the accompaniment of hip-hop music. The authors suggest that the ad seems to be about basketball (or shoes) but is really about…

I’m going to put up a bunch of Mad-Lib style sentences around the themes of this unit and ask them to complete them, then to do a rapid-fire list around one that really interests them, and then connect their lists to our various readings.

Then I will have them do the reverse: This reading seems to be about theme X, but really it is about _____. I hope this really inspires creative thinking and analysis that goes in a little more depth than the obvious. Did I mention that in addition to defining and exploring what is analysis is, the authors define what is an idea and what makes a good idea?

I think this might be a good prewriting exercise. To use it for my classes, I would add it to the digital analysis of a commercial.

Klondike’s Five Seconds to Glory commercial seems to be about Klondike bars, but it is really about the stereotype of American husbands, wives, and marriages.

Now if I can just figure out how to move them from the analysis (which they did well. I just think this would help them to do better.) to the evaluation aspect of the next paper built on the analysis paper.

Note: I would have posted a comment on AcademicCog’s post, but I don’t have either of those IDs on Dr. DavisTCE.