Also their 10 Books to Gift the Geeky Creative. I might look their for my own Christmas present from eldest son. 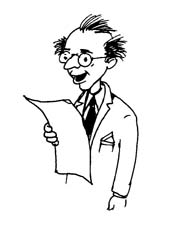 Also their How to Adapt to New Job Responsibilities:

Spending more time on these activities could lead to a significant increase in the benefits you receive.

Casting Out 9s Experiments in Digital Grading
He ends with:

So I continue to experiment with digital grading because it has a lot of benefits over old-fashioned paper grading. The one thing I have not figured out is how to make tests digital. We can make assessments on Blackboard that can be taken and graded online, but (1) I donâ€™t like locking in my assessments in to a proprietary format, (2) Blackboard doesnâ€™t do mathematical notation well, and (3) Iâ€™m not a fan of CMSâ€™s generally. So for now the tests and final exams are still on paper.

Blogging Your Research is Not a Recipe for Disaster

If we agree that science writing is valuable to society, scientists should share the same responsibility as journalists to provide comment and information in a clear and balanced way. Despite some examples to the contrary, there’s an awful lot of science writing on the web â€“ about established results, preliminary findings or work in progress â€“ that aims to do just that. The widespread coverage of the Opera neutrino results, much of which was excellent, is a great recent example. But it’s important not to ignore the exceptions, and figure out how to deal with them.

The view that scientists who write about their work online are somehow trying to subvert the scientific process is unfairly narrow. The web offers great potential for a rich and vibrant scientific debate reaching beyond the research community. We should work towards maximising that potential rather than rein it in.

Kate Clancy’s The Place of Science Blogging in Academia
Obviously I’m not in science, but I figure at least some of this must apply to us in the Humanities as well.

The Many Problems of Online Education:

Students already have access to great books, complete libraries, masterpieces of art, and classical music online, but for the overwhelming majority technology is used and valued for entertainment and social networking. All the information available at their fingertips is worthless if they lack judgment and the ability to use it appropriately. And there is no evidence that online instruction is changing students’ behavior.

Academhack’s Thoughts on Emerging Media and Higher Education. It’s from back in 2010, but may still be relevant.

Letâ€™s be honest, at any given session you are lucky if you get over 50 people, assuming the panel at which the paper was read was well attended maybe 100 people actually heard the paper given. But, the real influence of Brianâ€™s paper canâ€™t be measured this way. The real influence should be measured by how many people read his paper, who didnâ€™t attend the MLA. According to Brian, views to his blog jumped 200-300% in the two days following his post; even being conservative one could guess that over 2000 people performed more than a cursory glance at his paper (the numbers here are fuzzy and hard to track but I certainly think this is in the neighborhood). And Brian tells me that in total since the convention he is probably close to 5,000 views. 5000 people, that is half the size of the convention.